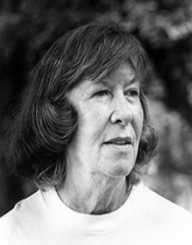 Mona Van Duyn was an American award-winning poet and scholar.

Van Duyn started reading poetic literature from her childhood years. She frequented the local library in Eldora on her off school days. In 1959 she debuted into the world of poetry with her collection Valentines to the Wide World. In this collection, Van Duyn explored the concept of marriage in society. She often dwelt on this topic in many of her future publications.

In 1964, she released the collection A Time of Bees. She set the poems in a marriage unit. Van Duyn narrated of the daily life of a research scientist husband who pinned dead insects on the wall for studying. The wife often watched as her husband sometimes pinned life bugs fighting for their dear breathe. Symbolically, Van Duyn delves on the need to appreciate the differences within the marriage set up. Other themes in the collection include friendship and mental illness, issues that need empathy and tolerance.

She gained a wide reputation for her third collection To See, To Take. In this collection, Van Duyn again speaks of love relationships. She narrates of two people fighting for their love while facing a myriad of obstacles. Similar to her earlier collections, she emphasizes the need to fight to keep the marriage institution from falling apart.

In 1982 Van Duyn released Letters from a Father and other Poems. In this poetic book, she talks about an aging couple who decide to fight to live despite several ailments. Their zeal to continue living is sparked by gifts they often receive from their daughter.

In 1992 she published If Be Not I: Collected Poems. Van Duyn put together her major works from 1959 to 1982. She got literary credit for her efforts to serialize all her themes in a single collection. She was careful to bring out her favorite themes of love, marriage and even death in this collection. Van Duyn admired the works of poets like William Yeats and Robert Frost. They inspired her to explore her own style.

Van Duyn used a unique style of half-rhymes and meter to punctuate her poems. She drifted away from the contemporary traits of poetry. In most of her poems, she punctuated her stanzas with unconventional lines. She could not fit in the classical poetry world. It was her distinct flow that won her wide acclaim from the literary world.

She added humor in her narrations. In poems that depicted a sad struggle in life, she expressed her ideas with a pinch of humorous satire to help the reader carry on.

Van Duyn also served in literary societies. In 1981 she got admitted to the Academy of American Poets. She got the nomination of serving as a life member Chancellor in 1985. In 1993 she became a Hall of Fame inductee in the St. Louis Walk of Fame. Three years later, Van Duyn became a member of the American Academy of Arts and Sciences.

Van Duyn died on December 2, 2004, in Missouri. She succumbed to bone cancer. During her illustrious career spanning three decades, she managed to explore the family issues in her own rhythm and style. She won accolades and recognition far and wide.

Van Duyn was a poet, teacher-scholar and literary critic. She dared to depart from the normal writing patterns of poetry to infuse her own style.