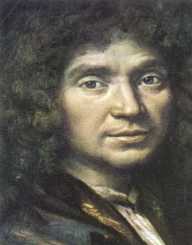 Moliere (Jean-Baptiste Poquelin) was a renowned French actor, playwright, stage manager, dramatist and director in the 17th century. Born on January 15, 1622, in the big city of Paris, France, he was taken to an affluent family and was able to attend some of the best schools. Eventually, he acquired some of the most excellent training in theater and fine arts. He was a guru in French comedy. Evidently, he was well known for directing and writing works like L’Ecole des femmes, Tartuffe ou I’lmpostueur and Le Misanthrope.

Moliere was liked by nobles and citizens of Paris, and this made him the most endeared figures in the theater. He gained the patronage of nobles like Philippe 1 Duke of Orleans. During his final moments in his career, his illness became an issue to his capabilities. He died on February 17, 1673, at fifty-one years of age after one of his best performances

Moliere was born on January 15, 1622, to Jean Poquelin and Marie Cresses in the great city of Paris, France. His father was an upholsterer by profession while his mother came from a wealthy family. His early childhood was a relatively calm one but later became gloomy when he lost his mother with whom he loved very much and acted as his confidant. After the death of his beloved mother, he lived in an upmarket locality in Paris with his father who took care of him.

As a child, he attended a renowned elementary school in Paris. After which he later proceeded to his tertiary education at Jesuit College de Clermont. After completing his college education, he pursued a brief career as a lawyer and also took part in his father’s work under Louis XIII until the king’s death in 1643. When he was 21, he decided to leave his social class and pursue a life on the stage. Later on, he co-founded the L’Illustre Theatre with the actress Madeleine Bejart.

In 1645, bankruptcy hit the new theater group Moliere formed. It resulted in him spending 24 hours in prison due to the many debts that the organization owed. In 1653 the troupe he led became the official theater troupe of Prince de Conti. The following year they presented a play known as’ L’Etourdi ou le Contretemps.’ Due to Conti’s disapproval of theater productions, they lost their donations in 1656. King Louis provided Moliere with Petit-Bourbon where his first two plays had a great run.

In 1659, Moliere performed his third play ‘Les Precieuses Ridicules’ and ‘Sganarelleou le Cocuimaginaire.’The troupe decided to move to Palais-Royal. In 1661 he presented ‘L’Ecole des Maris.’ In 1662 he and his troupe were honored by being welcomed in the king’s court. In 1665 he showcased ‘Dom Juan’ and ‘Le Misanthrope.’ In 1668 he led his troupe to perform the play entitled ‘George Dandin,’ L’Avare’ and ‘Amphitryon.’

As from 1669 to 1672 he showcased some plays which include; ‘Le Bourgeois Gentilhomme’ ‘Les Fourberies de Scaping and ‘Les Femmes savantes’’.In 1673 he gave his final stage performance ‘Le Maladelmaginaire’ after which he fell to the ground unconscious and died.

Moliere in the 17th century participated in several work performances. The ‘Le Misanthrope’ which was a popular play in the 17th century was considered as one of his greatest piece of work of all time. It was a play that focused on the French aristocratic society pointing out all its weaknesses. It was considered unique from all the others as it focused more on the character than on the plot. Till now it’s still in the archives and remains a beneficial play in French history.

Moliere was recognized with the title of ‘Troupe de Monsieur.’

On February 20, 1622, Moliere swore his matrimonial vows to Armande Bejart. Two years later they got two baby boys who died at the age of five years. They did not give up on their quest to get children. Fortunately, they got a girl child who grew up without any complications.
One of his most criticized work was the comedy ‘L’Ecole des femme which caused a lot of protest from his enemies after he gained favor from the king. They attacked him as immoral and claimed that it was plagiarized work. His work, however, had a lot of positive and widespread impact on the public.

In the 19th century, his comedies became famous among his critics in France. Moliere enjoyed immense support from the king. A majority of his works were even translated into English for easier comprehension, especially for non-French speakers. Some of the words used in his plays are in use even nowadays in modern French.

Moliere was diagnosed with pulmonary tuberculosis which also became the cause of his demise. While performing his last play, he coughed violently and was bleeding and collapsed on stage.

Moliere was not able to receive any last burial rites because the first two priests refused to conduct them. The third priest was too late. His wife appealed to the king, and his remains were laid to rest in a cemetery which was meant for unbaptized infants. In 1972 his remains were moved to French museum then later on relocated to Pere Lachaise Cemetery in Paris.