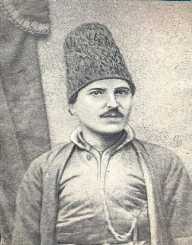 Mirza Fatali Akhundov was born on July 12, 1812. He was a writer and philosopher. He was also a founder of modern literary criticism. He became famous and popular for writing European inspired plays in Azeri Turkic language.

Mirza Fatali Akhundov was born on July 12, 1812, in Azerbaijan. He was born to Mirza Mammadtaghi and Nana Khanim. His parents divorced when he was six years old. He was raised by his mother. His uncle taught him how to read and write Arabic and Persian. His uncle also introduced him to many books that sharpened his love for literature.

In 1832, his uncle, Akhund took him to Ganja to enrol him at the madrassa attached to Shah Abbas mosque. Akhundov was on the intention that his nephew study logic and Islamic theology. At school, he learned calligraphy from poet Mirza Shafi Vazeh. Shafi also persuaded him to gain knowledge in modern sciences. In 1834, he moved to Georgia to work as a translator for the government. In 1836, he began teaching Azerbaijani language. In 1837, he published his first poem titled ‘The Oriental Poem’ in the Persian language. In 1850, he wrote his first play titled ‘The Tale of Monsieur Jordan the Botanist and the Celebrated Sorcerer, Dervish Mastali Shah.’ The play became famous as it was a success.

Akhundov later wrote another comedy play ‘Molla Ibragim Khalil, Alchemist, Possessor of the Philosopher’s Stone.’ The same year also saw him write ‘The Vizier of the Lenkoran Khanate.’ In 1852, he staged and wrote the play ‘The Miser’s Adventure.’ In 1855, his play ‘The Defenders of Right in the City of Tabriz’ was brought to the stage. He later wrote six other books that analyzed works of writers in the Persian and Arabic world. He penned philosophical works such as ‘The Sayings of Dr. Sismond’ among others. He came up with a new alphabet that he sent to linguists and Presidents of Iran and Ottoman Empire. The Ottoman Empire did not, however, accept the alphabet, so he wrote ‘Three Letters of the Indian Prince Kemal-ud-Doula to the Persian Prince Jalal-ud-Doula.’

2012 was declared the year of Mirza Fatali Akhundov by the International Organization of Turkic Culture.

Akhundov did not marry in his lifetime hence he did not have children. He passed away on March 9, 1878, in Tbilisi. He died at the age of sixty five.