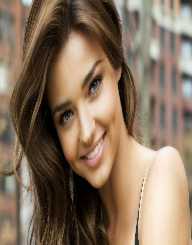 Miranda Kerr is an Australian model who is best known as the first Australian Victoria’s Secrets model and as the ex-wife of Britain actor Orlando Bloom.

Miranda Kerr was born in Sydney, Australia on 20 April 1983. Kerr was raised by her parents, John Kerr and Therese Kerr, in the small New South Wales town of Gunnedah. Kerr also has a younger brother, Matthew. She was a keen horse rider and motorcyclist as a child. Kerr attended high school in Brisbane and attended All Hallows School, a Catholic all-girls school.

Miranda Kerr won a modeling contest with Australian magazine Dolly at age 13. She took part in a photoshoot for the magazine which sparked media controversy. Many claimed it was wrong for someone as young as Kerr being paraded on the cover of a magazine. Others claimed that the photo shoot was borderline paedophilic. Kerr defended the shoot saying she was fully clothed and the magazine was aimed at teenage girls. Kerr signed with Chic Management, a modeling agency. Most of Kerr’s early work was with Australian swimwear and surfing chains such as Billabong and Roxy. After developing her reputation in Australia and Asia, Kerr relocated to New York. In New York, she became involved in the ownership of the Bowery Ballroom music venue. Kerr signed with NEXT Model Management in 2004 and had some runway appearances in America. Kerr was also involved in some print campaigns with Levis, Blumarine and Roberto Cavalli. Kerr continued to do work in Australia and appeared in campaigns for Australian Vogue. Kerr on American fashion reality shows Project Runway as a model for one of the contestants, Daniel Vosovic.

Kerr also makes an appearance in the Kanye West music video Number One. Kerr also became contracted to Maybelline in 2006. In 2007, Kerr became the first Australian model to be contracted with Victoria’s Secrets lingerie brand. She replaced Gisele Bundchen at Victoria’s Secret. Kerr became the face of Victoria’s Secrets youth line, PINK, in 2006 and remained the face of PINK for four years. Kerr made a guest appearance on the American comedy How I Met Your Mother, with other Victoria’s Secrets models in 2007. In 2008, Kerr was listed in the top ten of the highest earning models in the world. She was involved in some multimillion-dollar shoots in 2008 that greatly boosted her earnings. One of her big contracts came from becoming the face of the Happy fragrance made by Clinique. The following year Kerr signed with the IMG Models agency and launched her skincare brand, KORA Organics.

Kerr continued to be one of Victoria’s Secrets’ top models and also was involved in a campaign for XOXO. Kerr modeled for more high-end fashion brands in 2010, most notably Prada. 2011 saw Kerr walk for Dior, Chanel and Stella McCartney. She became an ambassador for the Australian airline Qantas in 2012. Kerr was named the second highest earning model in the world in 2013, behind Gisele Bundchen. Kerr left Victoria’s Secrets in 2013 and replaced Gisele Bundchen as the face of H&M. Kerr also fronted Reebok and Wonderbra campaigns in 2014. Kerr appeared as a mentor on series ten of the TV show, Australia’s Next Top Model.

Miranda Kerr married English actor Orlando Bloom in 2010. They have one son together, Flynn Christopher Bloom. In 2013, it was announced that the couple was divorcing. Kerr is currently engaged to the founder of Snapchat Evan Spiegel. Kerr denied claims she was a Buddhist and has asserted she is a Christian.