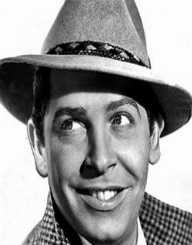 American actor and comedian Milton Berle was born Mendel Berlinger in  New York City on the 12 July 1908 to Sarah Glantz and Moses Berlinger. He was one of five children born to the couple. After Berle won a Charlie Chaplin competition as a child, his mother realized his potential and from then onwards, worked towards establishing a career in show business for him.

Milton Berle was a pupil at the Profesional Children’s School, New York City.

Milton Berle's long career in the entertainment industry started when he appeared as a child in the silent films The Perils of Pauline and Tillie’s Punctured Romance at the age of 5.

At the age of 10, he began appearing in vaudeville. He later became famous as a master of ceremonies in vaudeville. He broke into film in Hollywood during the 1930s and also worked in radio and nightclubs as a comedian.

Milton Berle found national fame and celebrity when he appeared as host of television’s Texaco Star Theatre during the early days of television in the United States. Initially, the show had been on the ABC radio network, and in 1948, he did a television test. He was selected as the television host for the show and which began broadcasting on television in September 1948.

The show was a huge success and made Berle one of the first television stars in the United States, where he became known as Uncle Miltie and Mr. Television.

Texaco Star Theatre broadcast at 8 p.m. on Tuesday nights and nightclubs, theatres and restaurants worked their schedules around the high-rating show. Due to the success of the show, he signed a thirty year $200,000 per annum contract with NBC giving them exclusive rights to his television appearances.

After Texaco ended its sponsorship, the show’s name was changed to the Buick-Berle Show (1953-1954), then in 1955, Berle was dropped by Buick. In 1955-1956, a new Milton Berle Show was produced in California but did not meet with the success of his early show. He then appeared as a host at the Kraft Music Hall and a 1960s game show, Jackpot Bowling.

Milton Berle renegotiated his 30-year exclusive contract with NBC which allowed him to guest star on various comedy shows and dramas, and he also acted in film and did shows in nightclubs and other platforms.

In 1950, the Texaco Star Theater was awarded an Emmy for Best Kinescope Show. Milton Berle was also presented with two stars on the Hollywood Walk of Fame in 1960; one for radio and another for television.

Milton Berle left an autobiography which he wrote with Haskel Frankel entitled Milton Berle: An Autobiography (1974). His first wife was Joyce Mathews. Berle and Mathews married and divorced twice. In 1953, he married Ruth Cosgrove, who died in 1989. His third wife was Lorna Adams. Milton Berle died of colon cancer on the 27 March 2002; he was 93 years of age.

From an early age, Milton Berle appeared on behalf of charities and did many benefit concerts and telethons throughout his career.