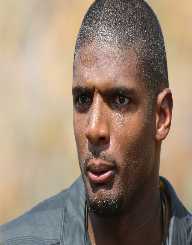 Michael Sam is a former American professional gridiron football player, who played on the defensive end. He was the first openly gay athlete to be drafted by NFL.

Michael Sam is the seventh of eight children, raised in a broken home. Michael Sam attended Hitchcock High School and was a water boy in the school’s varsity football team during eighth grade. Later he played defensive end and the offensive tackle in school.

Michael Saml got his first- team All-District honors when he played; he got the honor as a defensive lineman and offensive lineman.

Michael Sam performance as a senior drew attention when he played against Michael Brockers in a game against Chávez High School. His playing got him scholarship offers from Arizona, Colorado State Universities, and the University of Houston.

Even though Michael Sam waited for an offer from Texas A&M University, he later accepted a scholarship offer from the University of Missouri (Mizzou).

When Michael Sam started college football, he admitted his sexuality to his teammates. By the end of the year, Michael was named the SEC Co-Defensive Player of the Year and an All-America. He helped Mizzou win over Oklahoma State Cowboys in the 2014 Cotton Bowl Classic.

Michael Sam graduated from University in 2013. Michael Sam later tweeted that he was returning to Mizzou in 2015 as a postgraduate.

Michael Sam had a disappointing performance in the NFL Scouting Combine in February 2014 for linebackers.

Many thought that he was punitive for a defensive end, and too slow to play outside linebacker. Michael Sam had also openly confirmed his homosexuality in an ESPN interview.

The St. Louis Rams drafted him in the seventh round later, making him the first publicly gay player in NFL history. But he was later dropped from the roster, to meet the required fifty-three players.

Michael Sam then was part of the Dallas Cowboys practice squad but was waived in October for a linebacker.

Finally, he signed a contract with the CFL’s Montreal Alouettes in 2015. Later he quit the game, citing mental health reasons.

While looking to join a football team, Michael Sam participated in the twentieth season of Dancing With the Stars in 2015. He was partnered with Peta Murgatroyd, finishing in 10th place.

Michael Sam’s mother JoAnn was against playing football; he would stay with his friends while in high school.

One close friend Ethan Purl and his parents gave him a bedroom in their house and guidance he needed, allowing him to become the first in the family to attend college.

In January 2015, Michael Sam was engaged with his Sam and his boyfriend, Vito Cammisano, but ended their relationship after in good terms.