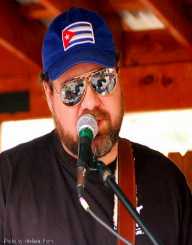 During Michael Houser's time in the University of Georgia, together with John Bell, came up with The Widespread Panic band. The name ‘Panic' was derived from John Bell's nickname.

Houser always had a problem of blood circulation when performing while standing. He was later advised to take a seat during his performance.

The duo shared the responsibility of composing their work. They later went on to record seven albums in 11 years with Capricorn recording company.

Even though the band shared the responsibility of writing their songs, Michael Houser took the credit of writing the band's most successful jams.

Michael Houser was married to Barbette; the two had two children together.

Michael Houser was diagnosed with Pancreatic Cancer in 2002. He succumbed to the illness on 10th August 2002 at a relatively early age of 40.