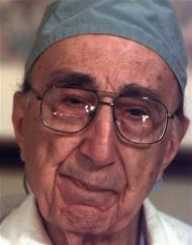 Michael Ellis DeBakey was born on September 7, 1908, in Lake Charles, Louisiana. His parents Shaker and Raheeja were immigrants from Lebanon.

After returning from Europe in 1937, DeBakey began to work in the surgical faculty of Tulane Medical School. From 1942 until 1946, DeBakey served as the member of Surgical Consultants Division in the Surgeon General office of the army. In 1945, he became the director of the office. One of the major works during this time was the development of the Mobile Army Surgical Hospital units. His concept greatly improves the survival rates of wounded soldiers. He later also helped to establish the Veteran’s Administration Medical Center Research System.

In 1948, DeBakey became the Chairman of the Department of Surgery at the Baylor University College of Medicine. From 1969 until 1979, he served as the president of the college and afterward, until 1996, served as Chancellor. DeBakey had an amazing ability to bring his professional knowledge to the public’s ear, which earned him a reputation as a medical statesman. During his career, he was involved in several commissions. He was a member of the medical advisory committee during Hoover Commission and the chairman of the President’s Commission on Heart Disease, Cancer and Stroke. He was also a member of the National Advisory Heart and Lung Council of the National Institute of Health.

When DeBakey 23 years old, he developed a groundbreaking technology- the roller pump, which 20 years later became an essential component of the heart-lung machine. In 1939, he and his mentor Alton Ochsner postulated that smoking has a strong correlation with carcinoma of the lung. In 1953, he became the first surgeon to perform a successful carotid endarterectomy and was one of the first surgeons to perform coronary artery bypass surgery. He also pioneered the use of Dacron grafts for blood vessel surgery. In 1958, he performed the first successful patch-graft angioplasty.

During the 1960s, DeBakey and his team began to record surgeries on film. He had a major role in establishing the Michael E. DeBakey Heart Institute at the Hays Medical Center. He also founded the Michael R. DeBakey Institute at Texas A&M College of Veterinary Medicine & Biomedical Sciences. In 1969, DeBakey was awarded the Presidential Medal of Freedom, and in 1987, he was awarded the National Medal of Science.

DeBakey practiced medicine for more than 75 years. He continued to practice until his death in 2008 when he was 99 years old. During his career, he operated on more than 60,000 patients, many of which were heads of state. In 2005, DeBakey suffered from an aortic dissection. He was the one who pioneered the surgical treatment for the condition. He was hospitalized at the Methodist Hospital in Houston and became the oldest patient ever to undergo surgery for this condition. He spent eight months in the hospital recovering from the surgery but managed to return to good health. DeBakey died on July 11, 2008, just two months before his 100th birthday.