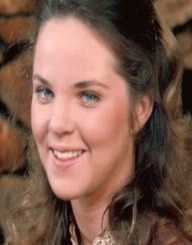 Melissa Sue Anderson is an American actress who is best known for a part in, Little House on the Prairie, as Mary Ingalls.

Anderson was born on 26 September 1962 in Berkley, California. Anderson was born twelve years after her older sister, Maureen. Anderson moved with her family to Southern California at the age of seven. As a child, she had asthma. To help aid with her medical condition, she was advised to take part in physical activities. The young Anderson took up dancing, and it was at dancing lessons that her parents were advised by one of Anderson’s dance instructors to take her to auditions.

Anderson was a big hit at auditions. Her blonde hair and blue eyes meant she was cast extensively in commercials. Anderson’s first TV role came in 1972 when she appeared in an episode of Bewitched. Bewitched was an American sitcom that ran from 1964 to 1972. The following year she appeared in another American hit sitcom, The Brady Bunch. The show was about a married couple who had three children each from previous marriages. Anderson played the love interest of one of the family’s sons, Bobby Brady, in a 1973 episode of the show. Anderson was cast in her best-known role in 1974 as she appeared as Mary Ingalls in, Little House on the Prairie. The show was a Western drama and aired on the NBC network. The show focused largely on the Ingalls family who lived on a small farm in Minnesota during the late nineteenth century. The show was based on an autobiographical collection of stories.

Anderson played Mary Ingalls, who was a real historical figure who lost her sight aged 14 due to scarlet fever. In the show, Mary attends school and later becomes a teacher for the blind. Anderson worked on the show for seven full seasons and two episodes of season eight before leaving the show in 1981. Anderson played Lance Kerwin’s love interest twice in two years, first in 1976’s, The Loneliest Runner, and again in 1977’s, James at 15. In 1979, Anderson received critical praise for her performance in the ABC after-school special, Which Mother is Mine, and starred in the made for TV CBS film, Survival of Dana. She appeared in four episodes of the TV show, Chips, in the mid-1980s. She provided the voice of Snowbird in the 1990s animated series, X-Men.

Anderson married Michael Sloan in 1990. Together the couple has two children, Piper and Griffin. Anderson became a Canadian citizen in 2007; she had lived in the country since 2002.