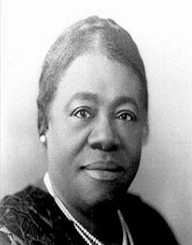 Mary McLeod Bethune was born 10th July 1875, to Sam and Patsy McLeod. She was born in Mayesville, South Carolina, United States. Her parents were former slaves, and Bethune was one of 17 children.

Her father farmed cotton, and her mother worked for her former master, doing their washing. Mary McLeod Bethune used to go with her mother to deliver the washing, and through visiting the nurseries of the white children, came across books, from where she developed the determination to learn both reading and writing.

Mary McLeod Bethune began to attend Trinity Mission School, a small school for blacks, in the local area. She walked five miles each day to attend, and as she was the only child in her family that went to school, she used to go home and teach her siblings what she had learned.

In 1894 she studied at Dwight L. Moody’s Institute for Home and Foreign Missions, located in Chicago. Mary McLeod Bethune wanted to be a missionary in Africa, but she was told black missionaries were not required, so she decided she would teach instead.

In 1896, Mary McLeod Bethune joined the staff of Haines Normal and Industrial Institute which was in Augusta, Georgia. The school was based on Christian missionary values, with an emphasis on character building as much as education.

The Presbyterian mission that ran the Institute transferred Mary McLeod Bethune to the Kindell Institute located in Sumter, South Carolina, after a year. It was there that she met her husband.

After they married and moved to Florida, Mary McLeod Bethune decided she would open her own school for girls. She opened the school in Daytona, Florida. Mary McLeod Bethune worked tirelessly to get the school set up, renting a small house and making the furnishings herself. The school opened as the Literary and Industrial Training School for Negro Girls.

Mary McLeod Bethune was very resourceful, and along with parents of her students and church goers, would bake and make food for the local workers of the dump which was just nearby, and raise money by selling their goods.

Mary McLeod Bethune started with six students and within a year had over 30 pupils. Local black churches provided donations of money and equipment, but Mary McLeod Bethune also started dealing with wealthy white folks and people such as James Gamble from Procter & Gamble, and Thomas H. White from White Sewing Machines, sat on her board of trustees for the school.

John D. Rockefeller provided a donation of $62,000, and Mary McLeod Bethune also became friends with Franklin D. Roosevelt and his wife, which gave her entry into a significant network of wealthy Americans.

She was very strict with her school curriculum. The girls would start their day at 5.30 am with Bible study. They took various classes in skills such as dressmaking, cooking, and millinery, which would allow for them to be self-sufficient as they grew older. Mary McLeod Bethune then added business and science subjects and followed this with normal subjects like mathematics, English, and languages. The students finished their day around 9 pm.

In 1931, Mary McLeod Bethune school was merged with the Cookman Institute, which was a boy’s school. It became the Bethune-Cookman College. Bethune was the President and steered the College through the Great Depression, and ensured it met the educational standards required by the State of Florida.

In 1942, Mary McLeod Bethune retired from the position of President as her health was declining due to her heavy work load.

At the same time as her teaching work, Mary McLeod Bethune was involved with several women’s groups.

From 1917 to 1925, she served as the Florida Chapter President of the National Association of Colored Women (NACW), which had been formed in 1896 to promote the needs of black women. Mary McLeod Bethune worked diligently for black women to be able to vote. She was impeded by the laws of the time and white administrators, and she was regularly threatened by members of the Ku Klux Klan, but she persisted nonetheless.

From 1920 to 1925, she was also President of the Southeastern Federation of Colored Women’s Club. This club worked with both colored and white women, to advance the cause of black women.

NACW became the first black-controlled organization to have headquarters in Washington, D.C., led by Bethune.

Her work and reputation were gaining attention on a national level, and in 1928, Bethune attended the Child Welfare Conference at the invitation of the President, Calvin Coolidge. In 1930, she was appointed to the White House Conference on Child Health by President Hoover.

Mary McLeod Bethune founded the National Council of Negro Women (NCNW) in 1935, based in New York City. Once again, the organization was to advance the cause of black women. She used her influence to unite representatives from 28 different groups to work together for her cause.

The NCNW hosted the White House Conference on Negro Women and Children in 1938. During World War II, they succeeded in being able to get black women admitted as commissioned officers in the Women’s Army Corps.

Mary McLeod Bethune lobbied the National Youth Administration (NYA) tirelessly until she became a full-time staffer in 1936. The agency provided programs for unemployed youth from 16 to 25. Two years later, Bethune was promoted to Director of the Division of Negro Affairs. She was involved in the Civilian Pilot Training Program, where some of the first black pilots graduated from.

During her time with the NYA, Mary McLeod Bethune was able to advance opportunities for blacks, including better salaries and work.

Mary McLeod Bethune became best friends with Eleanor Roosevelt, and once again was able to leverage the cause of advancement for black people through her friendship. The Federal Council of Negro Affairs was formed and was an advisory board while the Roosevelt’s were in power, to work on issues relating to black people.

Mary McLeod Bethune married Albertus Bethune in 1898. They had one child, a son named Albert. In 1899, they moved to Florida, where Mary ran a mission school. Her husband moved to South Carolina in 1907. The couple never divorced, but remained separated until the death of Albertus in 1918.

It is through the tireless work of trail-blazers like Bethune that change was made through the years to better the lives of black Americans.

Mary McLeod Bethune was an adviser to five different U.S. Presidents, a great accomplishment for anyone.

She was inducted into the National Women’s Hall of Fame in 1973. Mary McLeod Bethune has had buildings, schools, and streets named after her, and statues erected.

Another wonderful legacy is the school she founded, Bethune-Cookman University, which celebrated its 100th anniversary in 2004.