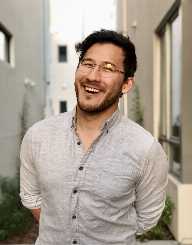 Mark Edward Fischbach was born on June 28, 1989. He is an American YouTube personality, entertainer, and social media personality. He is famously known as Markiplier. He has a YouTube Channel known as ‘MarkiplierGAME’ which has more that seventeen million subscribers and more than seven billion views. He also has more than four million followers on Twitter and Instagram. His channels in currently the twenty-third most subscribed channel on YouTube.

Mark Edward Fischbach was born on June 28, 1989, in Honolulu, Hawaii. He was born to a father who served in the army. After he was born his family moved to Cincinnati, Ohio. He was brought up alongside his elder brother, Jason Thomas who is an artist and an author of the webcomic ‘Twokinds.’ He attended the University of Cincinnati where he studied biomedical engineering but dropped from school to pursue a career in YouTube.

He began his career in 2012 when he joined YouTube. He created his channel under the username ‘Markiplier.’ His first series on his channel was a playthrough of the video game known as ‘Amnesia: The Dark Descent.’ He played other game series such as ‘Penumbra’ and ‘Dead Space,’ but his channel was later banned by YouTube. He later created the channel ‘MarkiplierGAME.’ In 2014, his channel was listed on New Media Rockstars top 100 channels. His channel was number sixty one. In the same year, he announced that he was moving to Los Angeles, California in order to be closer to other resources that would help develop his channel. The following year he was ranked number six in a list of the 20 most influential celebrities among teenagers in the United States.

In the same year, he collaborated with the YouTube Channel ‘Cyndago’ which was created by You Tubers Daniel Kyre and Ryan Magee. They were later joined by Matt Watson from Maker Studios. The channel was later disbanded after the death of Kyre. The channel was known for its music videos and for its sketches that had a comical and satirical tone. Mark featured in most of the music videos, and by October his channel had garnered ten million subscribers.

Markiplier later announced in a video that he had chosen to abstain from alcohol on doctor’s instructions due to a deficit enzyme. He also co-hosted the 2015 South West Gaming Awards with actress Janet Varney. He was also featured in the You Tube’s year end special ‘YouTube Rewind.’ In 2016, he signed to Revelmode with You Tubers PewDiePie and Jacksepticeye. In 2017, he has more than fifteen million subscribers. He has established a team to help him in his creation of videos. The team includes his friends Tyler, Ethan, and Kathryn and his girlfriend, Amy. In 2014, he became a member of the board of comic book publisher Red Giant Entertainment. He is also an actor, and he has appeared the film ‘Smosh: The Movie’ and television and web series such as ‘Table Flip,’ Villainous,’ Isabelle Ruins Everything’ and ‘Grumpcade’ among others.

In 2016, he won the Make A Wish Foundation Award Ceremony for the Celebrity of the Year.

Markiplier is not yet married. He had a net worth of $10 million.