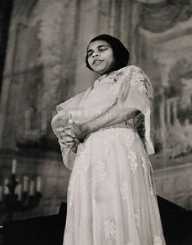 Marian Anderson was born on February 27th, 1897. She was born in Philadelphia, United States. When she was still a child, she had displayed her musical talent. However, she was not from a well-off family, and therefore her parents were not in a position to pay for music training.

Members of her church loved her and did not want her talent to go to waste. They contributed and helped in paying for her music classes. The church helped in paying for a full year music training. In 1955, Anderson became the first African-American member of Metropolitan Opera to perform in New York.

Marian Anderson was born in the late 1890s. Her parents were John Berkley Anderson and Annie Delilah Rucker. Anderson’s family was not wealthy as her father strived to provide food for the family by selling coal and ice. He also went ahead and opened up a liquor business after spending years in his early activity. Anderson was born in a family of three where she was the eldest. When she was six years old, she joined the church choir. Her church was called Union Baptist. With the kind of voice that she had, members of the church nicknamed her “Baby Contralto.”

Her parents were quite supportive in her music career. When Anderson was eight years old, her father purchased a piano for her. Unfortunately, her family could not afford anything beyond this. Anderson did not give up as she went on to teach herself how to play.

Anderson’s father died when she was 12 years old. Her mother was left to raise the three young girls. The young and talented singer did not the slowdown in chasing her dreams. She was fully committed to learning and training her vocals with the church choir. She yearned to perfect her vocals, and she rehearsed all the parts when she was at home. Whether alto, bass or tenor, she was right in all these.

The church was moved by the efforts that Anderson had in trying to make sure that she became one of the best vocal singers. Consequently, they all came together and contributed to paying for her classes with the famous Giuseppe Boghetti, who was a reputable voice teacher.

The mere fact that Marian Anderson was trained by a respected voice teacher also landed her opportunities to perform in New York’s big stages. For example, after teaching for more than two years with Boghetti, she got the opportunity to showcase her talents by performing in Lewisohn Stadium in N.Y.

Several other performances also followed suit. In 1928, she even got the chance of a lifetime by performing at the Carnegie Hall. Her music talent certain touched the hearts of many including Julius Rosenwald who offered her a scholarship. She took this opportunity and found the need to tour entire Europe.

It did not take time before Marian Anderson was famous throughout the Atlantic. During the late 1930s, she was honored by President Roosevelt and his First Lady, Eleanor by being invited to perform at the White House.  She was the first African-American to gain such honor from the highest office.

Regardless of the success that Marian Anderson had obtained, entire America was not in a position to accept her fully. This was the era where racism was rampant, and it affected her reception more so to the whites. In 1939, she was to perform at the Washington, D.C.'s Constitution Hall after her manager organized for this.

Daughters of the American Revolution (DAR) were the owners of the hall. They rejected such plans by claiming that there were no open dates for Anderson to perform. In the real sense, the DAR had refused Anderson’s quest to play for a little policy that had been set by them. This policy stipulated that the hall was only meant for white performers.

Word soon reached the public on what had happened. They were aggravated by this, and Eleanor Roosevelt came to Anderson’s rescue. She gave her the opportunity to perform at Lincoln Memorial where she was faced with over 75,000 people listening to her sweet voice.

Marian Anderson’s singing career never took a hit as she went on to succeed in her following years. When President John F. Kennedy won the elections, she was invited to perform the national anthem for the new president inauguration. This occurred in 1961 and 1963. The president honored her by awarding her Presidential Medal of Freedom.

She later retired from music performance in 1965. Years later, in 1991, the music fraternity awarded her with a Grammy for her lifetime achievement. Marian Anderson died in 1993 following natural causes at the age of 96.