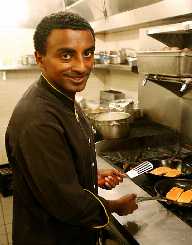 During the Ethiopian Civil War in 1974, both children were separated from the parents. They were afterward adopted by a couple from Sweden – mother Ann Marie and father, Lennart Samuelsson. Ann Marie was a housewife, but Lennart worked as a geologist. After the adoption, the children were renamed to Marcus and Linda. It is known that Tsegie, the biological father of Marcus, still lives in their hometown in Ethiopia.

First who introduced Marcus Samuelsson to cooking was Ann Marie’s mother, Marcus’s grandmother. She raised his interest so profoundly that he decided to attend the Culinary Insitute in Gothenburg. Later he studied in Austria, shortly also in Switzerland, until moving to the US in 1991. In the US he started working in a Restaurant “Aquavit.”

At a very young age, Marcus Samuelsson showed great talent, therefore very soon got a promotion. He became an executive chef at the age of 24. A couple of months later he received an excellent restaurant review from the New York Times magazine. He won three stars.

By the year 2003, he had received an acknowledgment of being the best chef in the New York City. This was granted to him by the James Beard Foundation. Later in 2003, Marcus Samuelsson started another restaurant “Riingo.” This diner soon became famous for the food served there. They focused on Japanese-influenced American dishes and drinks.

Marcus Samuelsson is not only a well-recognized chef but is also an author of several cookbooks. Some of his books have received awards. His books are published both in English and Swedish languages. The most popular books by Marcus Samuelsson are “The Soul of a New Cuisine,” “Aquavit and the New Scandinavian Cuisine” and “En Smakresa.” For the first one, he received an award from the James Beard Foundation as the best international cookbook.

In 2012 the book “Yes, Chef” was published. It was a self-biography, a memoir, on his way to becoming a world-wide recognized chef.

Since Marcus Samuelsson published his first books, he started giving lectures in several culinary schools and universities. He is a professor of culinary at the Umeå University.

Marcus reaches other interested public also through his television show “Inner Chef” (2005) and “Urban Cuisine” (2008). In these shows, he presents different approaches to mix cuisines from the US, Europe, and Africa.

In 2009, Marcus Samuelsson had the honor to be the chef for the first dinner for Barack Obama’s presidency. This lunch was intended in recognition for the Indian Prime Minister, Narendra Modi, therefore was strictly vegetarian. He received excellent reviews for his food at this dinner.

In 2010, Marcus Samuelsson opened his restaurant named “Red Rooster.” Soon after that, a fundraising dinner was held there for the Democratic National Committee, and it was very successful. This event raised 1.5 million USD; the participation fee was 30,800 USD per person.

Kitchen &Table is another restaurant of Marcus Samuelsson. This was created in collaboration with Clarion Hotels in 2012. The first restaurant was opened in a Clarion Hotel near the Arlanda airport, and later several other locations followed.

Marcus Samuelsson married Gate Haile (Maya Haile). She is a model. They married in Ethiopia and currently live in New York, close to the Red Rooster restaurant.