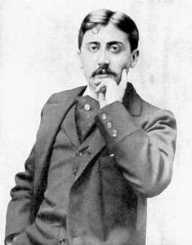 Valentin Louis Georges Eugene Marcel Proust was born 10th July 1871 in Auteuil, France. He was born at a time of civil unrest. His father, Adrien, was a renowned epidemiologist and pathologist.

Proust was a sickly child, and he had asthma. Despite his education being interrupted due to his illness, Proust was an outstanding student in literature.

In 1889, Proust joined the French army and spent 12 months serving in the military. Proust wrote for a journal called Le Mensuel from 1890 to 1891. He was a regular contributor with a society column.

From 1892 to 1896, Proust was a co-founder of Le Banquet, a literary review. He was also a regular contributor. Proust also wrote regularly for La Revue Blanche, another prestigious journal.

Proust published a compendium in 1896, and it was a collection of his earlier pieces. That same year, he also began writing a novel. In 1952, the book was published posthumously.

Over the next few years, Proust worked on translating two of John Ruskin's works. His translations met with good reviews.

Proust was undisciplined, a snob, and he was also a social climber. Between 1900 and 1905, his father died, his brother left home to marry, and his mother also died.

He received a large inheritance from his mother, but throughout the years, his health continued to decline.

Proust started to develop a novel in 1908, and by 1910 it was taking shape. He wrote the book, titled In Search of Lost Time, over the rest of his life. There were seven volumes, and the last three volumes were released after his death.

C. K. Scott Moncrieff translated the work between 1922 and 1931. He died before translating the last volume of the series.

Proust was gay, but he didn't openly discuss it.