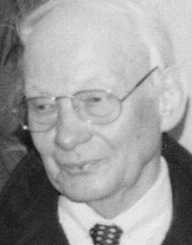 Manfred Eigen was born 9th May 1927, to Ernst and Hedwig Eigen. He was born in Bochum, Germany. Manfred Eigen attended school at the Bochum Humanistic Gymnasium.

At the age of 15, Manfred Eigen was drafted into the German Army. He served in an anti-aircraft unit. Near the end of World War II, he was captured by the Russians and held as a prisoner of war. He escaped from captivity and managed to get himself to Gottingen. In 1945, he began studies in physics and chemistry at the University of Gottingen. In 1951, he was awarded his Doctorate in Natural Sciences. His thesis mentor was Arnold Euken.

In 1951, Manfred Eigen started working as an Assistant Lecturer at the Institute of Physical Chemistry, at the University of Gottingen. During these early stages of his career, Eigen worked with two colleagues, Konrad Tamm and Walter Kurtze, researching fast ionic reactions. Detection of the reactions was made through ultrasonic absorption measurements. The group published their findings in 1953.

In 1953, Manfred Eigen took up an appointment at the Max Planck Institute of Biophysical Chemistry, in Gottingen. Over the ensuing years, Manfred Eigen continued his research. He was joined by Leo de Maeyer in 1954, and the two have collaborated on a variety of research to advance the study of biochemistry.

In 1964, Manfred Eigen was appointed as Director of the Max Planck Institute and Managing Director from 1967 to 1970. Manfred Eigen has written several books, some on his own, such as From Strange Simplicity to Complex Familiarity (2013), and some in conjunction with others, such as The Hypercycle: A Principle of Natural Self-Organization (1979) which was written with Peter Schuster.

Manfred Eigen was the founder of two biotechnology companies, Evotec and Direvo.

Member, Board of Sponsors of the Bulletin of the Atomic Scientists

Member, Council of Scientists of the Federal Republic of Germany

Manfred Eigen has been awarded many prizes and honors, some of which include:

Manfred Eigen married Manfred Eigen, and they have two children, a son named Gerald, and a daughter named Angela.