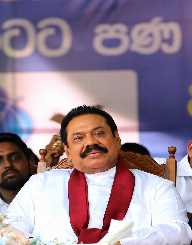 Percy Mahendra (Mahinda) Rajapaksa was born on 18 November 1945 in Weeraketiya in the Southern Province of Sri Lanka. He is from a powerful political Sri Lankan family. His father was a government official of high caliber. He served as a member of Parliament and a Cabinet Minister amongst other things. His uncle was also a government official and activist.

Mahinda attended Richmond College from there to Nalanda College before graduating from Thurstan College.

After his Father's death, he became a political candidate for the Belliata constituency and became the youngest member of Parliament at 24. He went to the Sri Lanka Law College where he studied Law and continued practicing except for the period when he served as a Minister between 1994 and 2001.

Mahinda became the President of Sri Lanka on 19th November 2005 till January 2015. He was the sixth President of Sri Lanka. He was the Prime Minister in 2004 until he became President in 2005. He served for two terms. The first in 2005, the second in 2010. He lost the 2015 bid in an attempt to return to the presidency for a third term. He thereafter tried unsuccessfully to be Prime Minister but he later won a seat as a Member of Parliament.

Mahinda Rajapaksa has been credited with ending the thirty year long war against the terrorist group that threatened the security of Sri Lanka. The extremist activities of the Liberation Tigers of Tamil Eelam (LTTE) came to an end in a dramatic warin May 2009. It was this singular victory that skyrocketed his appeal and got him re-elected in his second term in 2010.

Rajapaksa has been accused of using the war victory to create a cult around himself. Some of his supporters referred to him as King. He encouraged this with portrayals of himself as a strong man in the media. He splayed pictures of himself all over the media,  buses, billboards and currency notes.

Rajapaksa was accused of portraying a narcissistic personality by doctors, critics, and psychiatrists.

The Rajapaksa family was considered untouchable. However, investigations have been launched into the family that undermines the impression that they are untouchable. The former president’s son Yoshita came under investigation for money laundering and corruption. He was arrested in 2016

The University of Colombo conferred on him a Doctor of Law conferment in September 2009.

He was awarded an Honorary Doctorate by the Peoples’ Friendship University of Russia in February 2009 as recognition for his success in the defeat of the LTTE and for contribution to world peace.

He was also conferred with another honorary doctorate in 2011 by the Beijing University of Foreign Languages, China.

Mahinda married a child-psychologist and educator Shiranthi Wickremasinghe, in 1983. They have three sons together, Namal, Yoshitha, and Rohitha. Namal was the son who followed his father’s footsteps into politics and came under investigation for corruption.

Rajapaksa belonged to the Buddhist religion of the Theravada branch.

He was known to be very superstitious. He got the name Lord of the rings because of the several lucky charm rings he acquired.  He was also known to consult with astrologers.