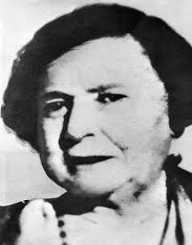 Ma Barker was an American criminal figure in the 1930s best remembered for Barker-Karpis Gang. The gang was responsible for various bank robberies, murders, and kidnappings. Her personality has however been a subject of public debate, others claiming that she was mistakenly killed by the FBI as the leader of the gang to excuse her cold-blooded murder.

Having grown up at a time when Jesse James gang terrorized his hometown, it is believed that she idolized the gang's operations having been an adventurous girl.

Ma Barker married George Barker at the age of 19. The two had four sons together. A report by the FBI shows that George was an irresponsible father who never paid any attention to their son's education.

His sons were always on the wrong side of the law and were severally arrested for petty thievery. She, however, defended her sons from anyone who was scolding or pointing a finger on them.

Ma Barker separated with George in 1915 after Barker and her four sons relocated to Tulsa.

After the release of Fred, Ma Barker's last born son from prison, he came home with his friend; Alvin Karpis, who had also been released from jail. The four brothers and Alvin Karpis formed Barker-Karpis Gang with the approval of their mother. Tulsa became the hiding place for the gang.

She was an adventurous woman who loved trying the extraordinary. The gang offered her what she had craved for since childhood.

The gang began their theft spree by robbing banks and supermarkets. Their first significant crime was in 1931 when they shot a town's sheriff during a shootout after a bank robbery.

The killing opened doors for a series of murders by the gang. Killing became the gang's trademark, and soon Ma Barker was in the police radar as a wanted woman.

The gang made away with over a quarter a million dollars on 29th March 1932. This was followed by another theft with violence just five months after getting away with a vast amount of money.

The second theft led to a serious shootout with the police. The shooting, however, placed the gang as the most ruthless and dangerous gang in America.

An intense investigation pointed to a house in Florida; the house that was believed to be the hiding place for the gang. Heavily armed FBI police officers surrounded the house and requested the occupants to surrender. After a failed attempt tear gas canisters were thrown to the house.

A machine gun was fired from the house, and the shootout began. The shooting lasted almost four hours when the federal agents ran out of fire ammunition.

Although Ma Parker was an accomplice of her sons' crimes, the FBI's narrative that she was the leader of the gang has been disputed by many.

There was no evidence linking her to the participation in any crimes committed by her sons. In his statement, Alvin Karpis said that Ma Parker was not their leader but played her motherly role.