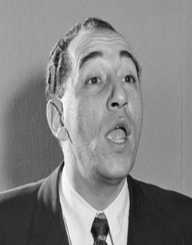 Louis Leo Prima was a man of various talents. His primary focus was as a trumpeter, singer, songwriter, and bandleader, but he was also an actor. Rather than being defined by one genre or one era of music, Prima changed with the times to remain relevant.

Louis Prima, an Italian-American, was born in New Orleans in the first part of the 20th century on December 7, 1910. His father was an immigrant from Sicily, and his mother immigrated from Ustica as an infant. The neighborhood where he grew up was home to a mix of Italians, Jews, Arabs, and African-Americans, so he was accustomed to various cultures. Best of all, the many nightclubs in the area allowed black musicians to play, which meant young Prima could hear some of the greats like Louis Armstrong.

Louis Prima's mother insisted that each of her children learn to play an instrument. Her first one was put on the violin, which he dutifully learned, but it just wasn’t what he wanted. His older brother, Leon, played the coronet. Prima took every opportunity possible to discover his brother’s instrument. Once he felt he’d mastered it, and while still in high school, Prima was already gathering up friends to form small bands. He started playing in his brother’s club shortly after school came to an end, and was picked up by Lou Forbes for a time.

In 1934, Louis Prima moved to New York, a mecca for artists and musicians in the 1930s. He started a band named the New Orleans Gang and recorded several moderately successful songs, such as “Star Dust.” He tried his hand in Los Angeles as well. Prima wanted to try a new sound, but it wasn’t getting a good reception, even when his friend and mentor, Guy Lombardo sent him to Chicago to try it out there in 1936.

He lost both friends and money, as he didn’t pay his musicians when the gigs failed. By 1937, Prima was back in New York with a smaller group, playing smaller venues. It was there he made it big, making money and connections.

Because Louis Prima was deemed “unfit” to fight in the War, Prima continued to play. In 1939, his performance in Washington D.C. was attended by Eleanor Roosevelt. Because of her, Prima played for the president’s birthday and was featured in several photographs. Even though WWII brought with it anti-Italian sentiments, Prima found true success in the 1940s.

Money and fame continued to pour in as he recorded hits such as “Angelina,” Bell-Bottom Trousers,” and “Felicia No Capicia.” By the end of the 1940s, however, the big band sound that had given him stardom was fading fast in popularity. Fortunately, he was no stranger to reinvention.

One could say the 1950s were Louis Prima's Vegas years. He dropped the massive sets, brought on a young female singer, and paid attention to the new fad, “rock and roll.” He had new hits, such as “Chop Suey, Chow Mein,” and his best-known song of all, “Just a Gigolo/I Ain’t Got Nobody.” He even performed “Old Black Magic” in 1961 with Frank Sinatra for John F. Kennedy’s inaugural gala.

Later, in 1967, he played King Louie (the orangutan) in Disney’s animated Jungle Book, performing “I Wanna Be Like You.” The success of the song led him to record more music for Disney soundtracks.

Louis Prima was married five times in his life. His first wife was Louise Polizzi, back in 1929. Their marriage ended when Prima was caught cheating on her. His second wife was Alma Ross, an actress. Their marriage began in 1936 and ended in 1945, when once again, Prima was caught cheating. At this point in his life, he was worth money, and he was expected to pay her alimony. He disregarded those payments until the total reached $60,000. They settled.

His third wife was Tracelene Barrette, who had been his secretary. They married in 1947 and divorced in 1953 when his fourth wife, Keely Smith, came onto the scene. Keeley Smith was only seventeen years old when Prima met her, but he heard the potential in her voice. With his coaching and her drive, the two of them went on to make several successful records together before their divorce in 1961. That same year, Prima’s father died. Four years later, in 1965, Prima’s mother died.

Louis Prima's fifth and final wife was Gia Malone. A simple waitress when he found her, she remained with him until his death. In 1976, three years after a severe heart attack, Prima was found to have a brain stem tumor. He slipped into a coma following surgery and never recovered. Prima died on August 24, 1978. His children with Malone, Lena and Louis, Jr., have both followed in their father’s footsteps as musicians.