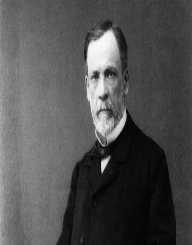 Louis Pasteur was a French microbiologist as well as a French chemist that developed the first vaccines for rabies as well as anthrax. He was creditedwith the invention of a technique for treating milk and wine to stop bacterial contamination. Louis Pasteur named the process after him and called it Pasteurisation. He is one of the pioneers in the field of microbiology and was known as one of the three founding fathers of bacteriology.

Louis Pasteur was an average student who failed an entrance examination into EcoleNormaleSuperieur, although he completed his doctorate. His disproved many long-held erroneous beliefs including the concept of spontaneous generation. He received international acclaim for the development of rabies drugs as well as his works in the field of germ.

Louis Pasteur was born on December 27, 1822, as the third child of Jeanne-EtiennetteRoqui and Jean-Joseph Pasteur. His father was a tanner and even served as a sergeant during the Napoleonic Wars. As a child, he was highly creative and could draw and paint. Louis Pasteur had little interest in academics and was known to be an average student. He earned his Bachelors of Arts degree in 1840 and Bachelor of Science degree in 1842. Louis Pasteur later entered the EcoleNormaleSuperieure in 1843 after failing the entrance examination once. He earned his Master of Science degree in 1845 before acquiring his advanced degree in Physical Sciences. He also earned his doctorate in Sciences in 1847.

In 1848, Louis Pasteur was appointed as a professor of physics at the Dijon Lycee. However, he quit the job to become a professor of chemistry at the University of Strasburg in the same year. Soon in 1854, he became the dean of the newly founded faculty of sciences at Lille University. Louis Pasteur demonstrated great excellence by working on his studies on fermentation. Through his experiment, he showed how the growth of micro-organism causes fermentation. He, however, proved that the growth was as a result of the bacteria growth and not the spontaneous generation as believed as at that time.

In 1857, he was selected as one of the directors of scientific studies at EcoleNormaleSuperieure. He served there until 1867. At the Institute, Louis Pasteur embarked on numerous reforms, and these increased the institution’s prestige. While he was at the institute, he became a professor of Geology, Physic, and Chemistry before he resigned in 1862.

His research on fermentation showed greatly what spoiled beverages. According to the research, beverages like beer, wine, and milk are spoiled as a result of the growth of micro-organism. Thus, he invented a process of killing most bacteria present in beverages with between 60 and 100°C. Louis Pasteur patented the method and called it pasteurization in 1865.

In the 19th century, Pasteur and his colleague worked on creating a vaccine to combat the deadliest disease. They worked on 50 dogs by testing the dogs with the vaccine created. However, he used it on a young boy who was bitten by a rabid dog in 1885 without being a licensed medical practitioner. The boy lived up to adulthood without developing any of the sickness symptoms. Louis Pasteur became the hero of that time.  He later established his institute which he called the Pasteur Institute. He served as the director of the institute till his death. After the one year of the inauguration of the Institute, the Institute started the first course in microbiology that has ever been taught in the world. He titled it Cours de Microbie Technique (Course of Microbe Research Techniques).

Louis Pasteur fell in love with the daughter of the University of Strasbourg’s rector, Marie Laurent while he was working as a professor of chemistry in the school. They got married in 1849 and gave birth to five children of which two of them survived to adulthood. The other three died of disease. He later gave up the ghost on September 28, 1895, after suffering from serious series of strokes.