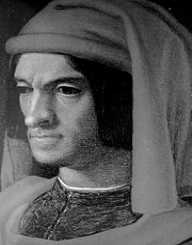 Politician, the rule of Florence and patron of the arts Lorenzo de’ Medici was born into the Medici family on the 1 January 1449. His parents were Piero de ’Medici and Lucrezia Tornabuoni. Cosimo the Elder, his grandfather, was one of the wealthiest men in Europe. Cosimo who was the first de’ Medici to run the Medici Bank as well as rule Florence. Piero was an art patron and collector, and Lorenzo’s mother was a poet. He had four siblings

Encouraged by his grandfather Cosimo the Elder, Lorenzo studied with the best teachers of his day. He was a pupil at the Platonic Academy of Marsilio Ficino where he was taught art, literature, lyre, and singing.

Intellectually gifted, at the of sixteen Lorenzo became involved in politics and displayed flair in administration, particularly regarding his family fortune. His father sent him on diplomatic missions where he met influential political and religious figures. In 1469 his father died, and Lorenzo and his brother Giuliano took over the ruling of Florence. At twenty years of age, Lorenzo was capable of ruling and showed a flair for politics.

Lorenzo ruled Florence with his younger brother Giuliano (1453–78) from 1469 to 1478. After Giuliano’s assassination, Lorenzo was the sole ruler of Florence from 1478. He was a generous patron of artists, scholars, and poets, sponsoring artists such as Botticelli and Michelangelo.

Because of the lack of political freedom under d’ Medici family rule rivalries existed. Various families were involved, including the Pazzi. This rivalry led to an attack on Lorenzo and Giuliano on the 26 April 1478 which resulted in the death of Giuliano. The Pazzi family with the backing of the Archbishop of Pisa and Pope Sixtus IV attempted to take control of Florence. The conspiracy was put down with ruthless efficiency including the hanging of the Archbishop of Pisa and others involved. Lorenzo's crack-down on those responsible for the attack led to Medici assets being confiscated by the Catholic Church as well as his excommunication. The church also sided with King Ferdinand I of Naples against Florence which led to war when Ferdinand invaded Florence. The battle continued for some years before Lorenzo organized successful peace talks.

Lorenzo went on to become a successful ruler who reformed state institutions, controlled the de’ Medici family and who influenced the politics of Italy through his network.