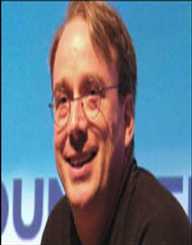 Linus Torvalds is the Finnish software engineer who created Linux Kernel operating system. Times magazine has named him as “one of the most influential people in the world.” He wrote “Linux as an operating system” as a part of his Master’s thesis at the age of 21. He has written a memoir ‘Just for fun: The story of an Accidental Revolutionary.’

Linus Benedict Torvalds was born on 28 Dec 1969 (Sun sign Capricorn) in Helsinki, Finland. His parents Nils and Ana Torvalds were journalists. He was very interested in computers and tried computer programming on his grandfather’s computer Commodore VIC – 20 at the age of 11. He studied computer science at the University of Helsinki from 1988 to 1996.

Linus Torvalds' studies were interrupted on account of compulsory military training for 11 months in the Finnish Army. He reached the position of Second Lieutenant and returned to the University to complete his studies. He was introduced to UNIX in the University, and his Master’s thesis was “Linux A portable Operating system.” He obtained a Masters degree in Computer Science. He belonged to the NODES research group.

Linus Torvalds bought his first computer but was not satisfied with the Windows operating system. He preferred UNIX OS which he had used in the University. In 1991 Torvalds was exposed to GNU Project. He was taken by another computer student Lars Wirzenius to listen to free software Guru Richard Stallman's speech. He used Stallman's GNU General Public License Version 2 for his Linux Kernel (GPLV2).

After months of programming, Linus Torvalds was able to start the Linux OS. He posted it on the internet in 1991 to inform other PC users of this system. The software was available for free download. He also released the source code. This allowed other computer programmers to modify it to suit their needs. An advantage of the source code being available was that many programmers helped Torvalds to retool and refine the software.

Linux operation was however not as easy to use as Windows, Apple’s Mac OS or IBM OS/2. A significant advantage was that Linux OS was more efficient and reliable. It rarely crashed. Linux also gained popularity when competitors of Microsoft started showing interest. Companies like Netscape Communications Corp., Corel Corp. Oracle, Intel Corp., etc. announced plans to support Linux. They found it to be an inexpensive alternative to Windows. The Linux code being free different versions could be developed. The secrecy of software code of other systems created security concerns for many organizations.

In 1996 Linus Torvalds visited Transmeta and worked there from 1996 to 2003. He was involved in 86 open to assist in choosing a binary format for Linux and UNIX. In 1999 Redhat and VA Linux both developers of Linux based software gave him stock options in gratitude for his creation. The companies went public, and Torvalds share value shot up to the US $ 20 million.

Linus Torvalds believed the open source was the only way to develop software. He faced criticism for using Proprietary BitKeeper software for version control in Linux Kernel. He subsequently wrote a free software to replace it called Git.

In 2008 Linus Torvalds was inducted into the Hall of Fellows of the Computer History Museum in Mountain View, California. He was one of the inaugural inductees into the “Internet Hall of Fame” in 2012. On 20 Apr 2012, he won the Millennium Technology Prize with Shinya Yamanaka. The honor is described as technology’s equivalent of the Nobel Prize.

Linus Torvalds was the recipient of the IEEE Premier Award in 2014.

The University of Helsinki has named an auditorium after Torvalds, and his computer is on display in the Department of Computer Science.

Torvalds became a citizen of US in 2010. He is the owner of Linux trademark and one of the highest authorities who decide the incorporation of new codes.