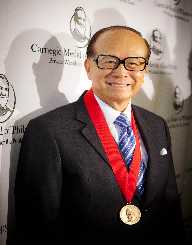 Sir Ka-Shing Li, second richest person in Asia and the 18th richest person in the world according to the latest (June 2017) Forbes report, is one of the most influential businessmen in the whole Asian Subcontinent. His present estimated net worth is the US $32.7 billion.

Li Ka-Shing was born on July 29, 1928, in Chaozhou in Guangdong province, China. His father was the headmaster of a local primary school. He was raised at a difficult time when political turmoil engulfed entire China. His family fled to Hong Kong in 1940 when Japanese invaded China. In the new alien surroundings, his family's effort to get a foothold to re-establish their lives received a rude shock when Ka-Shing’s father became ill with tuberculosis and passed away soon afterwards.

Li Ka-Shing had to abandon his education at the age of 15 as he was required to support his family after the unfortunate and premature demise of his father. Soon, he joined a plastics trading company as a salesman and started selling plastic watchbands and belts, working 16 hours a day most of the time. Continuing with his hard work, he also sold watches at his Uncle’s shop. He was noticed for his excellent selling skills and was entrusted with the additional responsibility of controlling the factory operations and product commercialization.

In 1947, Li Ka-Shing collected money, most of which was borrowed from close family members and established his own plastic manufacturing company, Cheung Kong. His business flourished throughout the 1950s when it started manufacturing high-quality plastic flowers and exported them to the United States. Cheung Kong became one of the leading suppliers of high-quality artificial flowers in Asia within a short span of time.

During 1967, a massive riot broke out in Hong Kong. People started fleeing to safer places and sold their properties, especially land and buildings at throwaway prices. Li Ka-Shing grabbed the opportunity with both hands and purchased as many properties as possible utilizing the scope to its’ fullest extent. After suitably arming himself with sufficient land, he ventured into the real estate business. He founded his real estate development company in 1971 and made it public in 1972, naming the company ‘Cheung Kong Holdings Ltd.’

In 1979, by purchasing a controlling interest in ‘Hutchison Whampoa Limited,’ his flagship company from HSBC, Li Ka -Shing became the first Chinese businessman to have acquired one of the largest British-owned local trading companies. The purchase was a major step in creating a massive conglomerate with diversified business interests. Due to this landmark acquisition, his company was able to generate business benefits in several businesses. The most prominent branch was his investment in the container port facilities worldwide including Canada, Hong Kong, U.S, Panama, Bahamas, Rotterdam as well as many developing countries. The company successfully purchased Husky Oil in Canada and set up mobile phone operations in Australia, Europe, and the United States. Under Ka-Shing’s able leadership, Hutchison emerged as the world’s largest independent operator of ports handling about 12-13% of all container port capacity in the world.

Li Ka-Shing was also a shrewd asset trader. Under his insightful guidance, CK Hutchison group used to build up new business ventures and sell them off when shareholder value was high. He obtained huge profits from such sales and his companies accounted for the 15% of the market cap of Hong Kong Stock Exchange. A subsidiary of CK Hutchison is the A.S. Watson Group (ASW). It is a retail operator with over 12000 stores encompassing retail brands such as Marionnaud (France), Kruidvat (Benelux countries), Superdrug (UK) in Europe, health and beauty retailer Watson stores, PARKnSHOP supermarkets (and spin-off brands) and Fortress electrical appliance stores in Asia. ASW is also the manufacturer and distributor of water products and beverages in the region.

Li Ka-Shing forayed into the internet and technology business as well. The internet service provider tom.com is highly popular in China. His investment and venture capital firm Horizons Ventures is specifically committed to finance and supply technological know-how to new internet and technology startup firms. Li Ka-Shing Foundation, one of his other ventures, acquired a 0.8% stake in social networking website Facebook for $120 million in two different rounds. The company also invested an estimated $50 million in the music streaming service Spotify.

Li Ka-Shing was conferred with the Knight Commander of the Order of the British Empire in 2000.

He was awarded the Grand Bauhinia Medal in 2001 in recognition of his highly remarkable lifelong contributions for the well-being of the people of Hong Kong. The award is the highest award under the Hong Kong honours and awards system.

The first ever ‘Malcolm S. Forbes Lifetime Achievement Award’ was presented to Li Ka-Shing on 5 September 2006 in Singapore by the Forbes Family.

Li Ka-Shing married Chong Yuet Ming in 1963. Unfortunately, she died in 1990, leaving her two sons from the marriage Victor Li and Richard Li motherless. They soon became acclaimed businessmen on their own and prominently placed themselves in the list of notable business figures of their country.

Li Ka-Shing is renowned for his excellent philanthropic works. He has donated millions to different educational institutions, hospitals and other dignified causes all over the world through his Li Ka-Shing Foundation established in 1980. Among his notable contributions, the HK$100 million donation each to the Hong Kong Polytechnic University in 2001 and the Lee Kuan Yew School of Public Policy at the National University of Singapore in 2007 is worth mentioning. He donated 5.3 million pounds to the University of Cambridge.