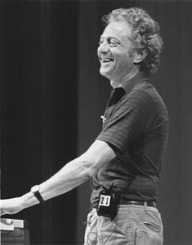 Leon M. Lederman was born on July 15, 1922. He is an American experimental physicist. He is famous for his research into the understanding of the particles nature and its basic forces. He is one of the main proponents of Physics First. He is an atheist, and he is known for authoring the book ‘The God Particle: If the Universe is the Answer, What is the Question?’

Leon M. Lederman was born on July 15, 1922, in New York, United States. He was born to Minna Rosenberg and Morris Lederman who was a laundryman. He attended James Monroe High School in South Bronx. He later joined City College of New York. In 1943, he graduated from the college with a BS in Chemistry. In 1948, he graduated with a Master’s Degree from Columbia University. In 1951, he obtained his Ph.D. from the same university.

Lederman served in the United States’ army for three years before he started his Masters. He participated in World War II where he was appointed second lieutenant in the Signal Corps. In 1958, he became a Eugene Higgins Professor of Physics at Columbia University. He held the post for twenty eight years as he also conducted his research. He later became a fellow of the Ford Foundation at Geneva’s CERN. He was part of a group that was sought to conduct the ‘g-2’ experiment. The experiments went on for nineteen years. In 1961, he became the director of the Nevis Labs at Columbia, a post he held up to 1978. He mentored many scholars who became physicists and professors. Majority of his works and research have been conducted at Nevis, Brookhaven, CERN and Fermilab.

In 1962, he discovered the ‘muon neutrino’ which led to his research on neutrino beam method and the demonstration of the doublet structure of the leptons. In 1977, Lederman was the head of a group of scientists that announced the discovery of a particle produced by the Fermilab particle accelerator. Two years later he was appointed the director of the Fermi National Accelerator Laboratory. In 1989, he retired from Fermilab and also resigned from his position at Columbia University. He later began teaching at the University of Chicago.

In 1989, Lederman became a member of the board of trustees for the Society for Science and the Public, a post he held until 1992. In 1991, he was appointed the President of the American Association for the Advancement of Science. His book ‘The God Particle: If the Universe is the Answer, What is the Question?’ Portrayed the importance of projects such as the Superconducting Super Collider project which was proposed in 1983. He is currently the Pritzker Professor of Science in the Physics Department of the Illinois Institute of Technology.

Leon M. Lederman was married two times. He first married Florence Gordon with whom he has three children, Rena, Rachel, and Jesse. He later married Ellen Carr after separating from Florence. They live at the Fermilab Laboratory in Batavia in Illinois. He sold his Nobel Prize at $765,000 to cover treatment costs since he is suffering from dementia. He is currently ninety four years old. He is the founder of the Illinois Mathematics and Science Academy.