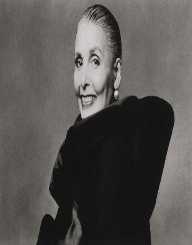 American jazz and pop singer, actress and civil rights activist Lena Mary Calhoun Horne was born on June 30, 1917, in Brooklyn. Her father Edwin left the family when Horne was three years old. Her mother was an actress who traveled with a black theatre troupe.

When Lena Horne was five years old, Horne started to travel with her mother. In 1927 she was sent to live with her uncle, Frank in Fort Valley, Georgia. He was a Dean of Students in the Fort Valley Junior Industrial Institute. When Horne was 12, she and her mother returned to New York. She attended Girls High School in Brooklyn but dropped out without earning a diploma. When Horne was 18, she moved in with her father in Pittsburg.

In 1933 Horne started singing in the Cotton Club, New York. The following year she rose from being a chorus singer to a featured role in the Cotton Club Parade. The Parade also starred Adelaide Hall, who took Horne under her wing. Later, she joined the Noble Sissle’s Orchestra and toured together with them. In 1940 Horne started touring with the bandleader Charlie Barnet, but disliked the traveling live style, and left to work in New York’s Café Society.
In New York, Horne replaced Dinah Shore on the NBC’s jazz series The Chamber Music Society of Lower Basin Street. Until 1941, the show’s resident maestros recorded together with Horne. She left the job only after six months since she was offered a job on the Sunset Strip in Hollywood.

Lena Horne made her Hollywood nightclub debut in 1942, performing at Felix Young’s Little Troc. She was then spotted by Metro-Goldwyn-Mayer and signed a few weeks later. Her debut with MGM was in the 1942 movie Panama Hattie where he performed the title song Stormy Weather. With MGM, she appeared in some musicals, like Cabin in the Sky. She wasn’t cast as the lead because of her race- in some cities theaters would not show films with black performers. For this reason, some of her performances also had to be taken out of the film.

In the mid-1950’s Lena Horne grew tired with Hollywood and decided to focus on her nightclub career. She was also blacklisted for associations with communist-backed groups in the ‘40s. Horne became one of the premiere post-war era nightclub performers. She traveled through U.S., Canada, and Europe as a headline performer. In 1957 she released a live album Lena Horne at the Waldorf-Astoria with RCA Victor, which, at the time, became the companies highest-selling record by a female artist. The following year she became the first African-American woman to be nominated for Tony Awards for Best Actress in a Musical.

Throughout the 1960’s Horne was featured in a variety of TV shows. She also started her TV special Monsanto Night Presents Lena Horne. In 1973, she co-starred in Tony and Lena together with Tony Bennet. The show was successful, and the two toured U.S. Horne has also played herself on The Sesame Street and Sanford and Son, as well as performed on The Cosby Show.

In 1980, Horne was scheduled to perform at a gala with Gene Kelly and Luciano Pavarotti. Pavarotti’s plane was delayed, and he could not appear, but from the sold-out Metropolitan Opera House, only three people asked for their money back. James Nederlander was one of the honored guests at the event and asked to be introduced to Horne. He went on to book Horne for a four-week engagement in the Nederlander Theater. The show was a major success and was extended to a year run. For her performance, Horne won Tony and two Grammy awards.

In 1984 Lena Horne was awarded a special Tony Award for her show Lena Horne: The Lady and Her Music. For this show, she holds the record for longest-running solo performance in Broadway history. In 1989, Horne received the Grammy Lifetime Achievement Award. During the ‘90s, Horne was more active in recording, rather than performing and recorded several solo albums with her club performances, as well as collaborative works. She made her final appearances in the New York Carnegie Hall.

Lena Horne was first married in 1937 to Louis Jordan Jones in Pittsburg. The couple had a daughter and a son, who died of kidney disease at 30 years of age. The couple separated and eventually divorced in 1944. Her second marriage was to Lennie Hayton, who was a music director at MGM. The couple separated in 1960’s but never divorced. Hayton died in 1971. Horne had a close friendship with Billy Strayhorn. Lena Horne died in 2010.