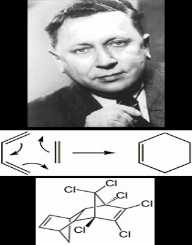 Born on July 10, 1902, Kurt Alder was a German scientist whose discovery and development of the diene synthesis or the Diels-Alder reaction won him the Nobel Prize in Chemistry. He shared the award with another German chemist, Otto Diels. The research led to the creation of artificial rubbers, plastics, alkaloids, dyes, drying, drugs oil and lubrication oils among several others.

Kurt Alder was born on July 10, 1902, in the industrial area of Konigshutte, Silesia currently Chorzow, Upper Silesia in Poland. Most of his childhood days, including his early education, were at Koniggshutte but left the area in 1922 when it became part of Poland after the World War I. The family left for Germany where he enrolled at the University of Berlin in 1922 to study chemistry. He continued at the University of Kiel where he also received his Ph.D. in 1926 under the supervision of Diels.

After receiving his doctorate, Alder started a career as a research scholar in Otto Diels laboratory in the University of Kiel. In 1928 while working alongside Diels, his former supervisor to research on the structure organic compound he discovered that a simple diene compound could be turned into a complex compound. The process of extraction was named the Diels-alder reactions or the diene synthesis. They further embarked on an in-depth research to obtain its full potentials. This served as the prelude to the processing of insecticides, synthetic plastic, rubber, and drugs among several artificial compounds. Alder in collaboration with his younger colleagues at the laboratory extensively researches into stereochemical, especially into unsaturated systems. The research was inspired by selection phenomena during organic chemical reactions. His investigations were extended to the behavior of bonds in stressed carbon ring and how intermolecular arrangements are formed.

Later at Kiel, he was appointed reader for chemistry by the Faculty of Philosophy in 1930. In 1934, he was promoted to a lecturer. In 1936, Alder left Kiel University after he was appointed as the head of the department in the science laboratories of the I. G. Farben-Industrie in Leverkusen. While there, he applied his research in the preparation and production of a synthetic rubber called Buna. Alder was appointed the Chair of Experimental Chemistry and Chemical Technology at Cologne University in 1940. He later became the Principal of the Institute of Chemistry. With his research, Alder became a much sought for in academia but had to decline some offers including an invitation from Berlin University in 1944 and from the University of Marburg in 1950.

Alder did not give up on his research even though conditions during the 1940s were not favorable for scientific research works. He further investigated into his original works and made several other discoveries. He came up with about 150 papers, which described his research work and were published in Justus Liebig's Annalen der Chemie, the Berichte der Deutschen Chemischen Gesellschaft and Angewandte Chemie.

Kurt Alder was married to Irene Hawthorne on March 10, 1948. After their divorce, he married Christiane Tocco on September 16, 1965. He died on June 1958, aged 55 from an unknown cause. His body was discovered in his apartment in Cologne, Germany after almost two weeks later by his niece.

Kurt Alder received several awards and honors for his working including the Nobel Prize in Chemistry in 1950; the Emil Fischer Memorial Medal from the Association of German Chemists, in 1938 and the lunar crater Alder is named in his honor. In 1950, he was conferred the honorary degree of M.D by the Medical Faculty of the University of Cologne and an honorary doctorate from the University of Salamanca in 1954.