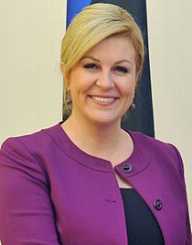 Also Known For : President Of Croatia

Kolinda Grabar-Kitarovic was born on April 29, 1968, in Rijeka, Yugoslavia (now Croatia). Her parents are Branko and Dubravka Grabar. She later changed her last name to Grabar-Kitarovic when she married in 1996.

As a teenager, Kolinda Grabar-Kitarovic spent part of her time going to an American high school in New Mexico because she was involved with a student exchange program. In 1986, she graduated from the American school called Los Alamos High School.

After high school, she began to attend the University of Zagreb. Here, she mostly focused on studying the humanities subjects. She graduated from this school with a bachelor’s degree in 1992.

Right after graduating with her degree, Kolinda Grabar-Kitarovic went into the workforce. While working in 1995, she also began to continue her studies. From 1995 to 1996 she took a diploma course at the Diplomatic Academy of Vienna.

She continued her education again in 2002 when she moved to the United States to study at George Washington University. She graduated from this school in 2003.

After earning her bachelor’s degree, Kolinda Grabar-Kitarovic began working at the Ministry of Science and Technology as an advisor. In 1993, she began working for the Croatian Democratic Union. Only two years later, she was the head of the North American department of the foreign ministry.

In the same year, she began resuming her studies. In 1997, she stopped working for the foreign ministry and took on a job as a diplomatic counselor in Canada in the Croatian Embassy. In the next year, she was promoted to minister-counselor.

Around 2000, Kolinda Grabar-Kitarovic moved from Canada back to Croatia. However, she was only here for about two years before she moved to the United States to continue her education. In 2003, she finished her education, and later in that year, she was elected to the Croatian Parliament. In 2004, she worked as a chairwoman for the Interim Committee. Her term ended for this job in 2005.

In 2005, she worked for the Croatian Delegation to the Stabilization and Association Council for the Implementation of the Stabilization and Association Agreement. Kolinda Grabar-Kitarovic worked here until 2008. In the same year, she became the Croatian Ambassador to the United States. She held this position until 2011. In the same year, she began working as an assistant secretary general of NATO in the Public Diplomacy division. She held this position until 2014.

In 2014, Kolinda Grabar-Kitarovic began her campaign for the Croatian presidency. After the election, it was proven that she won. She was sworn into office in February 2015. She was the first woman ever to be the president of Croatia. During her time as president, Croatia has faced many difficulties, including a flooding of immigrants in 2015, a fascist military petition, and other complications with fascists. Luckily, Kolinda Grabar-Kitarovic has been able to deal with all of these problems in a graceful manner.

Kolinda Grabar-Kitarovic is also workings towards giving the people of Croatia more social rights. She is in favor of most gay rights, sexual education, abortion, and green climate change initiatives. To help with these causes, she has helped to pass the Life Partnership Act, promoted sex education classes and advocated for adoption, and signed the Paris Agreement with the UN to work against climate change.