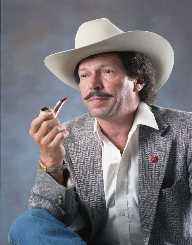 American satirist, musician and author Kinky Friedman was born on the 1 November 1944 in Chicago, Illinois. He was raised on a ranch, Rio Duckworth in Texas. His parents were S.T. Friedman and Minnie Samet. As a boy, Friedman was interested in chess and music.

Friedman was a pupil at Austin High School, graduating in 1962. He then enrolled at the University of Texas and obtained a BA in psychology (1966).

As a student Friedman was a member of King Arthur & The Carrots, a band which satirized the California surf sound of the Beach Boys et al. After university, he spent three years in Borneo working for the US Peace Corps.

Friedman returned to the United States in 1971 and formed another group, Kinky Friedman & the Texas Jewboys, another satirical band with outrageous names like Little Jewford and Big Nig. His father was not in favor of the title of the group and advised against using it. They made their first album with Vanguard Music, Sold American in 1973 and in 1974 he recorded Kinky Friedman for ABC Records. The band toured with Bob Dylan in 1975 and 1976 his third album Lasso was released. Lasso included appearances by Eric Clapton and Dylan. The band broke-up in 1979 and Friedman relocated to New York City.

Double Ego for Sunrise Records came out in 1983. Friedman has recorded over fifteen albums including From One American to Another (1995), Live from Austin TX (2007) and The Loneliest Man I Ever Met (2015) and Resurrected (2017)

During the 1980s Friedman developed his writing career. His detective novels include Greenwich Killing Time, A Case of Lone Star and The Mile High Club, Kill Two Birds and Get Stoned and The Christmas Pig. As well as novels, Friedman has published various columns and newspaper articles. He admitted in an interview with the Guardian newspaper that when his career was stalling, and he was taking too much cocaine, writing saved his life. (The Guardian, November 2000). A chance remark by his sister made him start writing, and he had twelve novels published. Fans include President Bill Clinton.

Kinky Friedman has run for political office sometimes including for Justice of the Peace in Kerrville Texas (1986) which he lost and Governor of Texas (2006) - where he gained only 12.5% of the vote.

Kinky Friedman is the founder of Utopia Animal Rescue an organization working to care for abused, abandoned and aging animals.