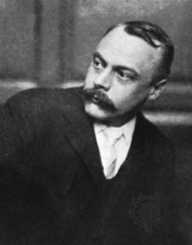 Kenneth Grahame was a British writer. Born on March 8, 1859, he gained fame with his classic children literature The Wind in the Willow, 1908. Also, he is known for the work The Reluctant Dragon, 1898. Both works were adapted for stage and films.

Kenneth Grahame was born in Edinburgh, Scotland on March 8, 1859. At about a year old, his father gained an appointment as sheriff-substitute in Argyllshire. He had three siblings, Willie, Helen, and Roland. Growing up young Grahame fell in love with the sea at always wanted to be close to it. At the age of five, he lost his mother to puerperal fever. Since his father was also battling alcoholism, he gave the care of Grahame and his sibling to their grandmother. The siblings lived with their grandmother and uncle, David Ingles, in Cookham.

Ingles, who was a curate at Cookham Dean church introduced the children to the riverside and boating.

Grahame received education at St Edward’s School in School, where he was an excellent student. His dreams of enrolling at Oxford University became a mirage because of financial reasons.

Not able to attend his dream university, Grahame gained employment at the Bank of England in 1879. In 1903, a shooting incident occurred at the bank, during which the attackers shot at Grahame three times. However, all the shots missed him. He retired as the bank’s secretary in 1908, owing to ill health.

Grahame gained interest in literature and writing growing up. This interest later became a career. He started with writing light stories published in London periodicals including the St, James Gazette. His work, Pagan Papers, 1893, is a collection of such stories. Following his debut work, he published The Golden Age in 1895. Later works include Dream Days, 1898, comprising The Reluctant Dragon. He then followed it with The Headswoman, 1898. In 1908, Grahame published his best-known work The Wind in the Willow. The Wind in the Willows inspired A. A. Milne’s play Toad of Toad Hall, 1929.

In 1899, Kenneth Grahame married Elspeth Thomson. The couple had a son, Alastair, who was born blind in one eye. The child also had frail health. On May 7, 1920, five days to his 20th birthday, Alastair committed suicide on a rail track. He was at the time an undergraduate student at Oxford University. Some literary scholars and historians believe Grahame was a homosexual. One of such people who hold that believe is Cardiff University Professor Emeritus Peter Hunt. According to him, Grahame shared an apartment with set designer Walford Grahame Robertson, in London. Grahame died on July 6, 1932, in Pangbourne, Berkshire. He is interred in Holywell Cemetery, Oxford.