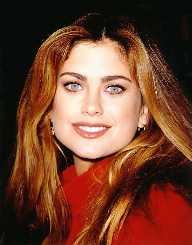 Kathleen Marie Ireland, popularly known as Kathy Ireland, was born on 20th March 1963 in Glendale, California. She grew up in the locality of Santa Barbara where she lived with her parents John and Barbara Ireland and her siblings Mary and Cynthia Ireland. Even in her childhood days, Kathy was a very diligent child. She would earn her own pocket money by selling hand-painted rocks and by working as a paperboy.

Kathy Ireland was a beautiful child with striking green eyes, a radiant smile and the perfect set of curves. Her eye-catching personality soon caught the attention of the ‘Elite Modelling Agency,’ and they signed her up for an endorsement. With this project, the soon-to-be Supermodel marked her entry into the modeling world.

Ireland rose to stardom in 1984 when she appeared on the Swimsuit edition of the favorite magazine ‘Sports Illustrated.’ For 13 consecutive years, Kathy Ireland was a part of the prestigious magazine’s swimsuit issue appearing on the cover of the magazine for three times in the years 1989, 1992 and 1994. The 1989 issue in which Kathy gains prominence for the first time as the cover model was SI’s ‘25th Anniversary Swimsuit Edition’ and is to date the best-selling swimsuit issue.

The green-eyed beauty made her television debut with the 1985 show ‘Charles in Charge.’ Though she hardly had any role in the show, her interest in acting stemmed from this show. However, Kathy’s first film ‘Alien from L.A.’ in the year 1988 was a big flop at the box-office. Since then, Kathy Ireland has made several appearances both in films and on television, but none of her works in the field of acting are noteworthy.

Kathy Ireland is one of the few successful ‘modelpreneurs.’ In 1993, Ireland became an entrepreneur by launching her line of socks. Her first business venture was highly successful having sold over 100 million pairs of socks in a very short span of time. Soon after, Kmart signed up Kathy Ireland for an exclusive deal and launched the fashion and brand marketing company ‘Kathy Ireland Worldwide.’

The company initially dealt with clothes and accessories. But eventually, after severing ties with retailer Kmart in 2003, the company expanded and started marketing a diverse range of products ranging from home furnishings to baby products, jewelry, wedding gowns, pet care and many more.

Model-turned-Mogul Kathy Ireland is a respected public speaker, a well-known novelist, and a philanthropist. The first of her literary works is the book titled ‘Powerful Inspirations: Eight Lessons that Will Change Your Life’ which was published in the year 2002. In 2009, Ireland published two more books viz. ‘Real Solutions for Busy Moms: Your Guide to Success and Sanity’ and ‘Real Solutions: 52 God Inspired Messages from My Heart’. She has also written three books for children titled ‘Mona's Favorite Words’‘What Do Mommies Do?’ and ‘An Angel Called Hope.’

Kathy Ireland is a pro-life advocate and a public speaker having delivered may keynote speeches including the one she gave at the Googleplex on July 12, 2012. She has also made several VSDA award-winning fitness videos. Her association with different charitable organizations and her efforts towards educating and empowering women and children makes her an acclaimed philanthropist.

Kathy Ireland is a Christian married to Doctor Gregory Olsen and is the mother of three children: Erik, Lily, and Chloe.