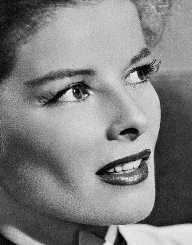 American actress Katherine Hepburn was born on the 12 May 1907 in Hartford, Connecticut. Her parents were Thomas Hepburn, a medical specialist; and Katharine Houghton who was an early feminist who was part of the Connecticut Woman Suffrage Association. Hepburn was one of six children. She lost her brother Tom to suicide when she was 14 and suffered the trauma of having been the one to discover it.

Katherine Hepburn was homeschooled then later studied at Bryn Mawr College. It was at college that she took part in stage productions and became interested in acting.

Katherine Hepburn started her acting career by playing various small stage roles and gradually worked her way up until a had a role in A Warrior’s Husband (1932). Her acting in this attracted the attention of Hollywood, and she soon had film offers. She had a hit film playing alongside John Barrymore in A Bill of Divorcement (1932), and this led to the signing of a contract with RKO.

Once established, Katherine Hepburn's career led to various successful films including Morning Glory (1933) for which she won an Oscar and Little Women (1933). She appeared on Broadway in The Lake (1934), on film in Alice Adams (1935) and Stage Door (1937).

Around the mid -1930s Katherine Hepburn was in a string of unsuccessful films including Mary of Scotland (1936) and Bringing Up Baby (1938). Out of favour with Hollywood over the box office failures, Hepburn returned to the East Coast and had a hit on Broadway with The Philadelphia Story (1938). The Philadelphia Story was adapted for film in 1940 and this success re-established her as a bankable Hollywood star.

In the 1970s Katherine Hepburn was in The Glass Menagerie (1973), Love Among the Ruins (1975) and The Corn is Green (1979). All three were television films. She was also in Rooster Cogburn (1975).  In 1981 she had an Oscar-winning performance playing opposite Henry Fonda in On Golden Pond. She continued working, and her final film was One Christmas (1994).

Katherine Hepburn married Ludlow Ogden Smith in 1928, and they divorced in 1934, remaining friends until his death in 1979. She also had relationships with Howard Hughes and Leland Hayward but refused proposals of marriage from both men. She had a 26-year long affair with Spencer Tracy who was married to Louise Treadwell. The pair kept their affair secret, and Tracy never left his wife. Hepburn only acknowledged the relationship after the death of Treadwell in 1983.