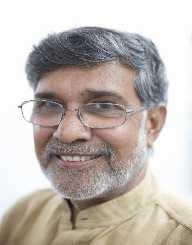 Due to Satyarthi's work, International labor organization adopted a convention on forms of child labor, which currently serves as a guideline worldwide. Satyarthi has been relentless and steadfast in his humanitarian work that has led to extensive recognition and awards. Quite recently, Kailash Satyarthi won the 2014 Nobel peace prize with a Pakistan activist Malala Yousafzay.

Kailash Satyarthi was born on January 11th, 1954, in Vidisha district in Madhya Pradesh, an Indian state. From his early days, Satyarthi was a very concerned and sympathetic person. Satyarthi found out that some of his peers worked under harsh conditions to earn money or were forced on various tasks by their parents or guardians, and could hardly go to school. Due to this, Satyarthi decided to take action and convinced his classmates to donate some textbooks which he gave to the needy children so that they could also study.

Due to his engineering academic qualifications, Kailash Satyarthi got a lucrative job as an engineer. However, this was not even close to his dream job due to his deep passion for humanitarian work. Due to this, Satyarthi quit his job after some time since he wanted to help other people, especially other children who were faced with child labor problems. In the year 1980, Kailash Satyarthi  founded a journal called `The struggle shall continue.’ Its primary objective was to create awareness of the existing issue of child labor.

At that time, there was a factory in which children were confined and forced to work. Kailash Satyarthi decided to take action, and with the help of fellow individuals that shared his thoughts, they held raids and rescued children from these factories, alongside their parents who were also held captive on labor bondage basis.

These were highly dangerous and violent raids and often led to Satyarthi being beaten up severely. The problem was widespread, which inspired Satyarthi to form a movement, named The Bachpan Bachao Andolan (BBA). Its primary objective was to get rid of bonded child labor and human trafficking.

Kailash Satyarthi brought about a new era in India as such an organization had never existed. It created massive awareness to the society as a whole on issues of child labor, its evils, and benefits of rescuing the children to help them lead a healthy life. The organization enjoyed great success, and as a result, the South Asian Coalition on child servitude (SACCS) was formed in the year 1989.

This organization has helped liberate many children, who worked as laborers for various industries. However, Kailash Satyarthi soon came to realize that when he rescued these children, it was not the end as they still found it hard to resume their normal lives.

Due to this, Kailash Satyarthi founded the Bal Ashram whereby the rescued children who were saved could be rehabilitated and taught some necessary life skills. Satyarthi continued being relentless in his work. In 1989, Kailash organized and led a global march about child labor. Its objective was to motivate various individuals and organizations to join the fight against child labor. Kailash Satyarthi has remained active in his work and later became a member of UNESCO’S education for all.

Kailash Satyarthi has a healthy family life with a wife and two grown-up children, consisting of a son and a daughter. Also, he has an extended family that includes rescued child laborers. He is known to be extremely good at cooking.