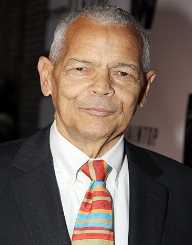 Horace Julian Bond was born on January 14th, in 1940. He earned his fame for being an American social activist. In addition to this, he was a civil rights leader. Part of his recognition stemmed from the fact that he served as the NAACP’s chairman from 1998 to 2010.

Julian Bond was born on January 14th, in 1940. His place of birth was in Nashville, Tennessee. He was the son of Julia Agnes and Horace Mann Bond. His father worked as a teacher.

On the other hand, his mother worked as a librarian. The mere fact that Bond was born into a family of scholars meant that their home was frequently visited by learned individuals and activists. At some point, Bond’s father went ahead and served as the Lincoln University’s president.

Julian Bond's activism career took off when he was in college. In 1960, for example, he was among the founding members of the Student Nonviolent Coordinating Committee (SNCC). For a period of about five years, he offered his services as a communications director for the committee. Later, in 1961, he quit Morehouse College with the intention of working on civil rights mostly in the south. He began leading students’ protests from 1960 to 1963. They were protesting against some of the laws that existed in Georgia at the time. This included Jim Crow Law that favored public segregation in public institutions.

In 1971, Bond opted to return to college to complete his education. Thereafter, he graduated with a bachelor’s degree in English.

Immediately after the Civil Rights Act of 1964 was passed, Julian Bond was one among the eleven black colored individuals that were chosen to the Georgia House of Representatives. During this period, the Voting Rights of 1965 had also been passed. Therefore, African-American individuals had the right to vote, just like other American citizens. This gave Bond the opportunity to run for political offices. He was successfully elected as a Democrat.

As an activist, in 1971 Julian Bond served as the Southern Poverty Law Center’s president. This is a position that he held until 1979. About two decades later, he was appointed to chair the National Association for the Advancement of Colored People (NAACP). He served in this post for about 12 years, completing his term in 2009.

Throughout his lifetime, Julian Bond was married twice. He first tied the knot with Alice Clopton in 1961. This marriage came to an end in 1989. Thereafter, he wedded Pamela Horowitz in 1991. The two lived together until Bond lost his life.