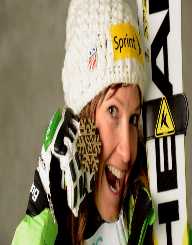 American Olympic alpine skier and commentator Julia Mancuso was born in Reno, Nevada on the 9 March 1984 but raised in Hawaii and California. Julia Mancuso is the daughter of Circo Mancuso and Andrea Webber. Her father was arrested for a $140 million marijuana illegal business when Mancuso was a child.

She became interested in skiing early in her life, and as a teenager in 1999, Julia Mancuso competed at Copper Mountain in Colorado. she had a World Cup top-30 finish in 2001. Meantime she continued competing at Junior World Championship level and won five gold medals.

At the 17, she went to the 2002 Winter Olympics as a member of the US team. Julia Mancuso was again selected for the US Team for the 2006 Olympic Games and rose to prominence when she won gold, the first American woman to do so in eight years. She participated at the 2010 Winter Olympics and won two silver medals. At the 2011 World Championships in Garmisch, she won silver in the Super-G and later that season a medal in the World Cup downhill race. She was also a bronze medalist in 2014. Julia Mancuso retired in 2018 as one of the most decorated female US Olympic skiers.

Julia Mancuso has various business interests including a line of underwear.

As well as skiing, Julia Mancuso surfs, cycles and does stand-paddling.

She has contributed to various charities including donating her prize money from the 2011 World Cup in Switzerland to the Japan tsunami relief fund.

Married to Dylan Fish (m. 29 December 2016), Julia Mancuso was previously in a relationship with Aksel Lund Svindal. Her father was released from prison in 2000, and they were reconciled.