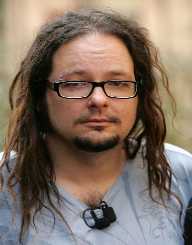 Jonathan Howsmon Davis was born on January 18, 1971. He is also known as JD and JDevil. Davis is an American musician best known for the leading roles in nu metal band Korn that is a well-known rock band.

Jonathan Howsmon Davis was born on January 18, 1971, in Bakersfield, California. His ethnicity includes a mixture of Scottish, English, Welsh, and German based on his parents Holly Marie, a professional actress and dancer and Ricky Duane, a keyboardist. He was blessed with a sister, Alyssa, a half-brother, Mark Chavez and half-sister, Amanda Chavez.

His parents had divorced when he was just three years old, and he later lived with his father and stepmother Lillie in Bakersfield. While living with his stepmother, Davis encountered a terrible relationship, and his father later divorced her. By 12 years, he had gained experience in instruments like piano, violin, upright bass, and clarinet. He used to practice on bagpipes for roughly six hours while in high school.

In 1989, Jonathan Davis graduated from Highland High School. Davis also went to study in the school of Mortuary Science in San Francisco. He used to wear eyeliners and long clothes, which led him to be teased and beaten by both students and teachers.

Jonathan Davis used to record songs out of his father's garage. He joined the band, Sex Art, which also included Ryan Shuck. James 'Munky' Shaffer & Brian 'Head' Welch later asked him to join their band, "Creep" and they formed KoRn, which released eleven studio albums from 1994 to 2013. When he graduated from college, Davis worked at the California Kern County Coroner's Office, and his work was relatable to a pathologist. He later became a mortician’s assistant

During his childhood, Davis had severe asthma and almost died when he was five years because of an asthma attack.

Jonathan Davis had had military visits like in 2012 when he visited the United States Armed Forces stationed in Europe and Ramstein Air Base, Germany. Since 1987, Davis has been a DJ, and he came back in 2009, at Infected Mushroom, introducing himself as JDevil in 2011.

As from 1998 to 2000, Jonathan Davis had been married to his high school sweetheart Renee Perez and had one child, but they divorced. Davis has been married to Devon Dabis from 2004 until present and has two children.