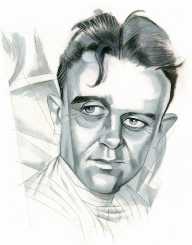 John Silas Reed was born on October 22, 1887, in Portland, Oregon. His mother Margaret Green Reed came from a prominent Portland family. Her father owned the first gas works in Oregon, the first pig iron smelter and was the second owner of Portland waterworks. Reed’s father Charles Jerome was agricultural machinery manufacturing representative. As a child, Reed was often sick and grew up surrounded by nurses and servants. His playmates were also selected for him from other upper-class families. He attended the Portland Academy and in 1904 was sent to Morristown School in New Jersey. Reed was not good with his school work, but got accepted in the football team and showed literary talents.

Reed’s father never attended college and wanted his son to go to Harvard. However, John Silas Reed failed his first admission exam but passed it for the second time. Reed got enrolled in Harvard in 1906. He threw himself in several student activities, like the cheerleading team, swimming team and drama club. He was also on the editorial board of the Lampoon and The Harvard Monthly, as well as the president of Harvard Glee Club. In his senior year, Reed was made the Ivy orator and poet. Reed graduated in 1910 and went to visit England, France, and Spain.

Upon returning to the United States, John Silas Reed set out to become a journalist. He went to live in New York and used his Harvard connection with Lincoln Steffens, who helped him get an entry-level position in The American Magazine. He began working there reading manuscripts, proofreading and helping with the composition. Additionally, Reed also worked as business manager on the magazine Landscape Architecture. During this time, Reed lived in Greenwich Village and wanted to establish himself as a freelance journalist. He wrote essays and short stories about his time in Europe and was eventually accepted by The Saturday Evening Post. Subsequently, his work was accepted by Collier’s, The Forum and The Century Magazine.

John Silas Reed began to become increasingly interested in social problems, and in 1913 he joined the newspaper The Masses. Reed wrote more than 50 articles and reviews for the publication. The same year, Reed attempted to speak on behalf of the strikers in New Jersey silk mills and was arrested. He allied himself with the trade union Industrial Workers of the World and put on The Pageant of the Paterson Strike in Madison Square Garden, to raise money for the strikers. Later that year, Reed was sent to Mexico to report on the Mexican Revolution for the Metropolitan Magazine. His articles about the problem established Reed as a war correspondent.

In 1914, when Germany declared war on France, John Silas Reed was sent by the Metropolitan magazine to Italy. In Naples, he met his Mabel Dodge, and the couple made their way to Paris together. His article “The Traders’ War” was published in the September issue of The Masses. Reed had trouble accessing the front in France, and he became increasingly frustrated by the wartime censorship. He and Dodge went to London together, but then she decided to leave for New York to his relief. He spent most of the 1914 drinking and pursuing various affairs. Reed later went to Berlin and met with Karl Liebknecht, a German socialist who voted against the war credits.

At the end of 1914, John Silas Reed returned to New York and began writing about the war. In mid-1915, Reed once again traveled to Europe together with the Canadian artist Boardman Robinson. They encountered the devastation in Serbia, Bulgaria, and Romania. Reed and Robinson also traveled to Russia, where they were arrested since the Russian ambassador considered them to be spies. They were also arrested upon trying to slip in Romania. All these experiences later became Reed’s book The War in Eastern Europe. In 1916, Reed met Louise Bryant and married her at the end of the year. He also underwent a kidney removal operation and published Tamburlaine and Other Poems. The United States were getting closer towards war, and Reed's views led to ending his relationship with the Metropolitan. He wrote several aggressive articles for The Masses, expressing his views against the war. The United States Postal Service refused to mail the magazine.

In 1917, John Silas Reed and his wife went to Europe to work as journalist and report on the developments of the political situation in Russia. They found out that Russian economy was devastated and that Ukraine and Finland were seeking to forge a military union with Germany. Reed and Bryant were at the ground zero of the October Revolution, where Vladimir Lenin and his Russian Social-Democratic Labor Party took over the government and struck the worldwide socialist revolution. During this time there was a shortage of food, and crime rates increased.

John Silas Reed was an active supporter of the socialist government revolution and began working for the People’s Commissariat for Foreign Affairs. He was close to the new Russian leadership and met Leon Trotsky, who introduced him to Lenin. Reed published the book 10 Days That Shook the World in 1919 about the events in Russia.

When John Silas Reed returned to America, he and Bryant began defending the Bolshevik government and opposed American intervention in the affair. Reed organized a gathering of 1000 people in Philadelphia and was arrested for inciting a riot. He began to become more and more political, aggressive and destructive. In September 1918, he organized a demonstration in the Bronx to defend the Russian revolution.

In 1919, Bryant went before the Senate committee for exploring Bolshevik propaganda, and John Silas Reed was also shortly after questioned. He also stood a trial in Philadelphia for his pro-Bolshevik speeches but was acquitted after convincing the jury that the case was about free speech. He began serving as the editor for The New York Communist. Reed also joined the Communist Labor Party of America.

In 1919, John Silas Reed fled America since he was indicted for sedition. He went to Sweden, then Finland and finally arrived in Moscow by train. He tried to return to the United States in 1920 in a coal bunker on a ship but was discovered and take into custody. He was beaten severely, but never gave up the names of his local contacts. Therefore he was not tried for treason. Reed had to pay a fine for smuggling jewels, but he was still detained. His physical and mental health deteriorated rapidly. Reed was finally released in June and traveled to Petrograd.

John Silas Reed further traveled to Moscow and attended the Communist International Congress. He was ordered by Grigory Zinoviev to attend the Congress of the Peoples of the East in Baku. The journey on the official train was five days long and went through the devastated countryside. In Baku, he learned that Bryant had arrived in Moscow and went to see her, but during his trip home he fell ill with typhus. He died in Moscow on October 17, 1920.