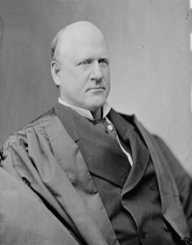 John Marshall Harlan served as an Associate Justice of the Supreme Court of the United States and was known as The Great Dissenter’ for his disagreement on several civil rights and racial segregation cases that upheld the draconian judicial system and illiberal mindset which existed post the Reconstruction era in America.

Harlan was born on June 1, 1833, in Kentucky into a family of lawyers. His father James Harlan served a US Congressman, Secretary of State, and later as a state legislator. He had a brother named Robert who was mixed-race. Brought up together, Robert had an early influence on Harlan, raising awareness on issues of racism. Harlan enrolled at Centre College before pursuing law at Transylvania University. He practiced under his father and got admitted to Kentucky Bar in 1853.

Harlan got his first job as a military chief administrative officer of the state when he was only 18. Like his father James, he was also a member of the Whig party. But very soon he switched his allegiance to the xenophobic and anti-Catholic Native American Party, despite himself being a devout Christian fundamentalist. After joining the Opposition Party a year later, Harlan played a key role in forming the 10th Kentucky Volunteer Infantry Regiment. He also served as a colonel in the Western Theater of the American Civil War.

In 1863, he became the Attorney General of Kentucky. Five years later he joined the Republican Party. Harlan continued his law practice alongside active politics when he opened a law firm along with fellow Republican John E. Newman. In 1877, President Rutherford B. Hayes for whom Harlan had campaigned in the run-up to the Presidential Election, nominated the latter for the position of associate justice in the Supreme Court.

Harlan served in the Seventh Circuit in Chicago till 1896 before shifting to the Sixth Circuit in Kentucky. However, Harlan was constantly in debts, and to alleviate monetary woes, he started teaching constitutional law at the Columbian Law School.

Harlan came to be known for his dissent against the Civil Rights Cases and the infamous Plessy vs. Ferguson case of 1896. The Supreme Court failed to honour the Reconstruction Amendments when they held the Civil Rights Act of 1875 as unconstitutional. Harlan also dissented, upholding his anti-racial views in prominent cases like Giles v. Harris and Lochner v. New York. Plessy vs. Ferguson, which is regarded as one of the worst decisions in the history of the American justice system, supported racial segregation regarding the use of public facilities. Harlan was the lone dissenter in the case that was decided by a vote of 7 to 1. Harlan’s harsh critique of the Supreme Court’s decision was much publicized. The maverick justice, however, was against the increasing number of Chinese immigrants in the States as he showed in his dissent in United States v. Wong Kim Ark case.

Harlan married Malvina French Shanklin in 1856, and the couple bore six children. His three sons followed their father’s example and became hugely successful in myriad professions. Harlan passed away October 14, 1911 parting ways with the Supreme Court after thirty-three years of service. Till the day he died, Harlan, in his later years also taught at New York Avenue Presbyterian Church where he as an elder.