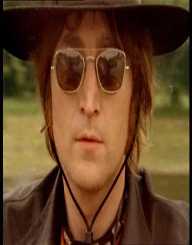 John Winston Lennon is an artist of British descent from Liverpool. He was born on the 9th day of October 1940. John attended both Dovedale Primary School and Quarry Bank High until the year 1957. His father - Alfred, was of Irish origin and was an unsung merchant seaman. His mother was named Julia Stanley.

The chosen career path of his father led to him being far away from home for long spells. His mother developed a relationship with another man as a result of his absentee dad. His mother’s new relationship was the reason for her pregnancy which caused the divorce of his parents when Lennon was just five years old.

The destruction of his family forced John to stay with his aunt, Mimi and Uncle George. This particular aunt and uncle were not fortunate to have children. His aunt Mimi was vehemently opposed to his musical talents and abilities. It was his birth mother who nurtured and provoked his musical interests.

John Lennon admired the famous Elvis Presley, and this admiration led him to the inauguration of a band. The band was labeled as Quarry Men and was started by Lennon at the tender age of sixteen. The meeting with Paul McCartney could be labeled a twist of fate as the duo met at a  fete thrown by the church in the year 1957. It was then that Lennon asked him to be a member of the band.

From the apparent tales of Lennon’s tragic family history, it is not difficult to believe that Lennon suffered from an abandonment phobia after he lost his mother in an accident the year 1958.

John Lennon performed poorly in school and did not pass his GCE-O level examinations. Despite his poor achievements in school and difficulties getting into the college of his choice, he got admission to the Liverpool College of Arts. Lennon was kicked out of the college for failing his examination, and due to his unruly behavior, he was tagged unmannered.

The Beatles were formed in 1960. The Beatles music journey began with the recruitment of McCartney as well as George Harrison, Stuart Sutcliffe and Paul Best. Paul Best who served as “The Beatles” drummer for a few years was replaced by Ringo Starr.

It was records like ‘Please Please Me’, ‘She Loves You’ and ‘I Want To Hold Your Hand.’ that made the band become famous. The Beatles became more renowned than acts such as Tommy Roe, Chris Montez, and Roy Orbison. “Beatlemania” was the term coined for people who jumped onto the crazed Beatles fans’ bandwagon.

It was no mystery that the British band became legendary even in the United States as well around the world. Lennon’s band had experienced countless support and thus became an even bigger success than most other US bands.

After already having established a name on the music scene, the Beatles began acting in films, “A Hard Day’s Night” was the first movie The Beatles acted in. The film came out in the year 1964 and thus became a success.

For many years the Beatles became a household name and enjoyed much success until the tragic death of Brian Epstein in the year 1967, which caused The Beatles to disband.

Lennon moved adrift from the band in an attempt to follow his solo career in the year 1969. Many soloists do fail to launch their career after becoming famous from band success but Lennon actually managed to launch his own album ‘John Lennon/Plastic Ono Band’. This album yet again became very successful.

Like most good things, Lennon had to halt his musical career to partake in bigger responsibilities such as being the ideal dad to his son. Similar to most musicians, Lennon fell into the trap of alcoholism. His break from the musical scene wasn’t long lived because in October 1980, John Lennon released his next album ‘Double Fantasy’.

The Legend of the Beatles

Whilst most people are aware of the fact that John Lennon was responsible for forming the band “The Beatles”, he was also a songwriter. Lennon was one person who managed to achieve his dream of making an impact beyond his home country and all over the world.

The Beatles as a rock band transformed the rock music scene and thus band members like john Lennon, Paul McCartney, George Harrison and Ringo Starr enjoyed much commercial success. Lennon was known prior to starting his band and soared to great heights because of the band.

Lennon managed to hold onto his musical idyllic dream even though his home situation was not at all stable. Aside from his parent’s divorce, he lost his mum in his early teen years who was the only family member who thoroughly supported his music dream. His life which was marked by trauma at all angles; filtered its way into his musical lyrics which was enjoyed all over the world.

Lennon reaped the benefits of the group’s fame and he also handled his solo career very well. Like his behavior in university indicates, Lennon was defiant by nature and thus his role in political and peace promotion was apt for his strong personality.

John Lennon received the Grammy Award for his hit track “Michelle“ which came out in the year 1967. He was lucky enough to gain the Grammy Lifetime Achievement award by the year 2014.

Lennon’s awards also expanded to the range he won with The Beatles. In 1970; the band got the Academy Award for Best Music in the documentary ‘Let It Be’. Another award bagged by The Beatles was in the year 1977 and was The Brit Award for the Best British Group.

Aside from the numerous awards received, Lennon was acknowledged for his talents as a performer, writer and co-writer. The musician also had twenty five number one hit singles which made it on the U.S Hot music charts.

Lennon faced an early death at the lively age of forty years. His life was taken away by a deranged man who took a deadly shot at Lennon.

As previously mentioned, John Lennon took a break from his career to play the role of a family man. His family life involved his marriage to a co-student Cynthia Powell. She had studied with Lennon at the Liverpool College of Arts. Cynthia and Lennon had a son but just like his parents, Lennon too divorced his wife in 1968.

Lennon also married Yoko Ono in the year 1969. Ono like Lennon was a singer and a peace activist. Lennon had another son with Ono, but Ono played a monumental role in helping Lennon launch his solo career.