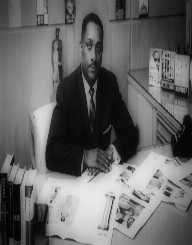 African-American publisher and businessman John H Johnson was born in Arkansas City, in January 1918. He was the son of Leroy and Gertrude Johnson. Johnson’s father was killed in an accident when he was a boy, and he was raised by his mother who encouraged her son to study. Because there was no public high school available for African American students in Arkansas during his teenage years, his mother moved the family to Chicago.

His first job was working for the Supreme Liberty Life Insurance Company. Starting off doing basic office tasks, Harry Pace, the company president heard the young man giving a speech and subsequently took an interest in his career. Johnson became his Pace’s assistant, and he was able to learn how to operate a successful business.

After raising a loan of $500 with his mother’s assistance, Johnson established the Johnson Publishing Company. His first publication was Negro Digest in 1942 which was moderately successful. He followed this release up in 1945 with Ebony, a magazine aimed at the African American market. Ebony was hugely successful, and soon Johnson was able to attract advertisers as he highlighted the emerging black consumer market. Ebony remained successful and by its fortieth year of publication had a circulation of over two million. In 1951 his company began published Jet, a weekly magazine.

With his successful publishing business, Johnson was able to establish the Ebony Fashion Fair in 1958 which was run by his wife, Eunice. This venture was also successful, and the couple then launched Fashion Fair Cosmetics. By the early 1970s, Johnson Publishing was involved in various media outlets including radio and Johnson was one of the country’s most productive business leaders. In 1982 he was listed on Forbes 400, the first African American to appear on the list.

Johnson was the recipient of many awards and honors including being the first African American to be awarded the United States Chamber of Commerce Young Man of the Year award in 1951. Other awards included the National Association for the Advancement of Colored People’s Spingarn Medal (1966), publisher of the year (1972) and a Candace Award for Distinguished Service (1989) presented by the National Coalition of 100 Black Women Johnson also received the Communication Award in 1995. Then in 1996, he was awarded the Presidential Medal of Freedom. Johnson was also awarded some honorary doctorates.

Johnson married Eunice Walker in 1941, and the couple remained married up until his death in 2005. The couple had two children, John Jr. who died in 1981 and Linda Johnson-Rice (b.1958) who succeeded her father as CEO.

In 1993 Johnson published an autobiography: Succeeding Against the Odds.

John H Johnson died on the 8 August 2005 from heart failure. He was eighty-seven years of age.