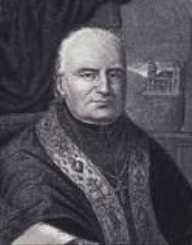 John Carroll was the first bishop in the United States and served as the first archbishop of Baltimore. Under his guidance, the Roman Catholic Church flourished in America. He is known for skilfully imparting the doctrines and undertaking activities for the advancement of education by setting up the Georgetown University which is the oldest Catholic educational institution in the States. Carroll also founded the first secular parish, the Saint John the Evangelist Catholic Church.

Carroll was born into a wealthy planters’ family with her mother Eleanor Carroll being the heir to a large plantation which sat on a thousand acres of land near Marlborough Town, in the Province of Maryland. His father Daniel Carroll I was also an affluent planter and a politician.

After studying in a Catholic school, Carroll left for French Flanders to attend the College of St. Omer. His brothers were very successful politicians with his cousin Senator Charles Carroll referred to as one of the Founding Fathers of America, having been the only Catholic signatory to the Declaration of Independence.

After joining Saint Ignatius of Loyola’s Society of Jesus at a mere age of 18, Carroll soon became an ordained priest before formally getting acknowledged as Jesuit in 1771. The suppression of Jesuits was becoming a common occurrence all around Europe. This prompted Pope Clement XIV to issue a papal brief abolishing and suppressing the Society of Jesus.

A dejected Carroll returned to Maryland. Soon after, the Continental Congress sent a delegate which included Carroll and a certain Benjamin Franklin on a mission to Quebec to convince the French Canadians to join hands with the Thirteen Colonies in the American Revolutionary War. Having impressed, Carroll was appointed the provisional "Superior of the Missions” in the thirteen states in 1784 by Pope Pius VI. It is believed that Benjamin Franklin put in a good word for Carroll to the apostolic nuncio to France.

Mainly due to the philosophy and jurisprudential concept of separation of Church and State, there was no regulatory mechanism that controlled the functioning of the churches in America. Carroll understood the need for lay involvement and widespread reforms and laid grounds for the organization of a new system.

Nineteen priests of Maryland made a formal application to Cardinal Antonelli and in April 1789, Carroll was chosen the Bishop of Baltimore by a considerable majority. Apart from Georgetown University, Carroll paved the way for the creation of many religious and educational institutions. He approved the foundation of Visitation Academy by the Visitation Nuns or Visitation Sisters. Carroll initiated the constitution of the first Roman Catholic seminary in America after the Revolutionary War, the St. Mary's College and Seminary in Baltimore. He also supervised the construction of the first cathedral in the United States of America, the Cathedral of the Assumption, which is now known as the Basilica of the National Shrine of the Assumption of the Blessed Virgin Mary. Always a proponent of Christian unity, Carroll believed that Catholics and Protestants should work hand in hand for a greater good and lamented the misinterpretation of ecclesiastical doctrines in creating differences.

Carroll was made the first archbishop of Baltimore in April 1808 with multiple jurisdictions. In 1815, he was inducted into the American Antiquarian Society, one of the oldest historical societies in the States.

John Carroll passed away on December 3, 1815. He was succeeded by Leonard Neale. Carroll’s remains are interred in the Basilica of the National Shrine of the Assumption of the Blessed Virgin Mary or the Baltimore Basilica.