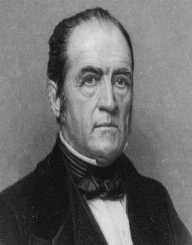 John Bell was an American plantation owner, lawyer, politician, statesman and presidential candidate for the Constitutional Party in the 1860 US general elections.

John Bell born was in Nashville, Tennessee on February 15, 1796, though some sources place his year of birth as 1797. He was the son of Samuel and Margaret Bell and had eight siblings. He grew up and went to school in Nashville. In 1814, Bell graduated from what is the today’s University of Nashville with a degree in law. Two years later, he got admitted to the bar. Bell founded his legal office in Franklin, Tennessee soon after his admission to the bar.

In 1817, he entered the local state politics as a Democrat candidate. Bell ran for a seat in the Tennessee State Senate and won. He served for one term and declined a reelection offer. Instead, he moved back to his legal practice in Nashville. He practiced law until his election bid to the US Congress.

In 1827, he successful vied for a seat in the US Congress representing a district in Tennessee. In his first term in office, he established himself as progressive Congressman from the south. He was reelected in 1829 for his second term. Bell supported the controversial Indian Removal Act. The act gave the US government legal powers to forcefully relocate the Native Indians from their ancestral lands. Bell also served in other select Congress committees.

Bell got reelected for a third and fourth term in office. He distinguished his political career in Congress as a staunch supporter of the US President Andrew Jackson. Political rifts emerged between the two in early 1831. Bell expected to be named as the US secretary of War. In the cabinet reshuffle, President Jackson skipped his name and nominated Lewis Cass instead. Despite the letdown, Bell remained a steadfast supporter of the Jackson administration with the Democratic Party and in Congress.

In his fourth term, he differed again with Jackson over the Bank of the United States. When the seat of the Speaker of Congress fell vacant in June 1834, a bitter battle between pro and anti-Jackson factions in the House of Representatives broke out. Bell won the seat with an endorsement from the anti-Jackson faction. In the 1835 elections, Bell decided to support the Whig Party candidate instead of the Jackson endorsed Democratic candidate. In response, the Democrats engineered a vote on the Speaker’s seat in which Bell lost to a pro-Jackson ally.

In the 1839 elections, Bell defended his seat on a Democratic ticket despite campaigning for a rival party in other elective positions. He helped the new Whig Party upstage the Democrats in the state of Tennessee. In the presidential elections, the Whig Party candidate William Harrison won the elections. Bell became the Secretary of War in the new cabinet earning the wrath of his Democratic colleagues. When John Tyler succeeded Harrison as president, Bell retained his cabinet post.

Tyler as Bell came from a Democratic background. In his administration, he became hostile to the core policies of the Whig Party. He opposed and even vetoed most party legislation in Congress. Eventually, in September 1841, Bell led a host of cabinet secretaries in a mass resignation. He went back to his home state and galvanized grassroots support for the party.

In 1847, Bell returned to national politics after six years. He got nominated by the Whig-controlled Tennessee House of Representatives to fill the vacant post of the US Senate for Tennessee. He won the seat with a resounding majority. In the Senate, Bell clashed with the Democrats over several issues. He opposed the new President James Polk’s aggressive stand on the Mexican-American War and the annexation of the Mexican territory of California to the US.

Despite being a slave owner, Bell supported the right of Congress to dictate the terms of slavery on all the US territories. He opposed the inclusion to the Union of territories like of slave-owning territories like Kansa, Nebraska, and California until they renounced the trade. Bell surprised many by voting against the slave trade abolitionist law within the Senate. He also supported the admission of California and New Mexico as Free states in the Union.

Party intrigues and internal rivalry weakened the Whig Party. The most emotive was the issue of slavery. Most of the northern Whigs decamped to join the Republicans. The division worsened when most of the defectors voted for the Missouri compromise creating a demarcation on slavery between the Northern Free states and the Southern slave-owning states. Bell voted against the compromise and lost.

In May 1860, some of the former Whigs formed the Constitutional Party. Bell won the presidential ticket of the party in the May nominations. The Republican Abraham Lincoln won the presidential elections. When the southern states threatened to break away, Bell met with President Lincoln. Lincoln assured him of a peaceful resolution. In April 1861, following the Union army invasion of the south, Bell aligned the Tennessee state to the Southern Confederacy in the civil war. He never took an active part in the war because of his ill health and old age.

On September 10, 1869, Bell died in Tennessee. He was survived by his second wife Jane Yeatman and five children from his first marriage to Sally Dickson who died earlier.