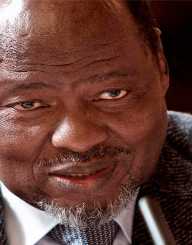 Joaquim Chissano is a Mozambican politician; he is best known for his time as president of Mozambique and as chairperson of the African Union.

Joaquim Chissano was born on 22 October 1939 in Malehice in what was at the time known as Portuguese East Africa (modern-day Mozambique). He became the first African native to attend Liceu Salazar, which was the only high school in Mozambique at the time. After he graduated, he traveled to Portugal to study medicine in Lisbon. His political ideology was not tolerated in Portugal, which was under quasi-fascist rule at the time. Chissano moved first to France and then to Tanzania, where a community of Mozambican exiles had gathered.

Joaquim Chissano began his career in student movements that sought to build international support for Mozambican independence. In 1961, he founded the National Union of Mozambican Students. The next year he was part of a group that founded the Front for the Liberation of Mozambique (FRELIMO). The group would lead the Mozambican War of Independence which began in 1964. Frelimo received support from the communist countries of the world, who were also backing independence movements in Portugal’s other African country, Angola. Cuba in particular offered key support in the form of civilian and military advisors and personnel. Although heavily outnumbered, FRELIMO hoped to force a stalemate and bring about a negotiated settlement. By 1968, FRELIMO had gained control of a significant portion of the country and were carrying out regular guerrilla strikes. Their numbers had swelled to eight thousand fighters. The Portuguese attempted to win local and international support by starting a major public infrastructure campaign. This however, backfired as dam construction led to the displacement of farming communities and increased support for FRELIMO.

In 1969, Chissano’s mentor and leader of war effort for FRELIMO, Eduardo Mondlane, was killed. His death was blamed on Portuguese assassins and the Portuguese followed up his death with a counteroffensive. The attack produced a hundreds of casualties on the FRELIMO, but the Portuguese also suffered 132 casualties. What followed was the bitterest period of the war as a severely weakened FRELIMO continued to harass the Portuguese and these attacks would lead to retaliations. The Portuguese carried out a massacre at Wiriyamu, killing between one hundred and fifty and three hundred villagers. What followed was FRELIMO abandoning its policy of avoiding targeting Portuguese civilians. As the situation worsened in Mozambique, Portugal was suffering from its own political instability. Communist groups began carrying out attacks in the country and resistance sprang up against the oppressive rule of Estado Novo. Finally a military coup in 1974 ended the decades of dictatorship in Portugal. The new government had no appetite for continuing its colonial wars and Mozambique was granted independence in 1975. Hundreds of thousands of white colonists fled the country.

Chissano was made Minister of Foreign Affairs by the countries first president, Samora Machel. Almost immediately civil war broke out in the country. FRELIMO was opposed by groups that received financial and material support from the white governments of South Africa and Rhodesia. FRELIMO had declared Mozambique a one-party socialist state and would support other revolutionary movements in Africa. This made the white-controlled countries nervous and also fermented dissension at home with people who hoped independence would bring about democracy and freedom. FRELIMO again relied on support from its communist bloc allies and now found itself defending against the very guerrilla tactics it had used against the Portuguese. The war brought economic ruin to the country and worsened the famines which ravaged the country. Both sides committed war crimes in attempts to achieve victory. The war began winding down in 1990 with Apartheid South Africa near collapse and the communist bloc’s fall seeing both sides lose their main backers.

Chissano had taken over the presidency of Mozambique in 1986 and began developing relations with the Western European nations 1980s and began abandoning the more radical of their communist policies. Chissano led talks with dissident groups which brought an end to the civil war in 1992. United Nations’ peacekeepers were deployed to the country and a war that had killed one million people was ended. Chissano accepted the creation of opposition political parties and granted amnesty to all rebel groups. One of Chissano’s policies saw the introduction of Transcendental Meditation for all members of the Mozambican armed forces and government employees.

Chissano claimed it was the practice of meditation that allowed the country to transfer to a peaceful normality. Chissano’s rule was marked by a decline in violence, crime and rapid economic development. He was re-elected in 1994 and again in 1999. He pursued a policy of poverty eradication and negotiated a write off of twenty two billion dollars of Mozambican national debt. His rule saw fifteen percent of the population lifted out of poverty. Despite his success and popularity Chissano did not seek a third term as president and stepped down in 2005. His rule had seen dramatic falls in child mortality and increases in literacy. He went on to become an envoy for both the African Union and the United Nations. He served as chairperson of the African Union from 2003 to 2004 and was a special United Nations envoy to Southern Sudan in 2007. 2014, saw Chissano advocate LGBT rights in Africa.

Joaquim Chissano is married to Marcelina Rafael, and they have four children together.

Joaquim Chissano was the inaugural winner of the Mo Ibrahim Prize for Achievement in African Leadership in 2007. The prize recognized Chissano’s efforts in ending the Mozambican Civil War and his support of democracy by stepping down as president in 2005. Chissano was unable to accept the prize in person as he was working for the United Nations in Southern Sudan.

Joaquim Chissano has been criticized for his friendship and support of Zimbabwean dictator, Robert Mugabe.

Joaquim Chissano is involved with some foundations and has spoken about tackling the issue of water scarcity in Africa.