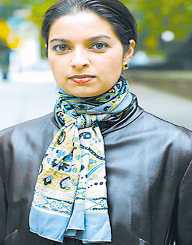 Jhumpa Lahiri was born in 1967 in London. Her actual name is Nilanjana Sudeshna Lahiri, but prefers to be called her nickname “Jhumpa.” Her parents had immigrated to the United Kingdom from Bengal, but the family moved to the United States when Jhumpa was only two years old. Living in the United States most of her life, Jhumpa Lahiri identifies herself as an American. In the early childhood, the family lived in Rhode Island. Her father works at the University of Rhode Island. He is a librarian. Her mother cares for her Bengali roots a lot; therefore they all visited their relatives in Calcutta as often as possible.

Jhumpa Lahiri attended kindergarten in Rhode Island. This was where she gained her nickname. It was created by a kindergarten teacher, who admitted that it was much more comfortable in everyday use than Nilanjana Sudeshna. Even though it was easier for the kindergarten staff, Lahiri has stated that it made her feel uneasy, that her real name was causing someone difficulties. This struggle over her name and real identity has also influenced some of Lahiri’s work later in life.

Lahiri graduated in 1989. She attended the Barnard College, where she got a bachelor’s degree in English literature. Later on, she attended the Boston University. There she received several degrees in English, creative writing, comparative literature, renaissance studies. From 1997-1998 she took a fellowship at Fine Arts Work Center in Provincetown.

Jhumpa Lahiri was not published for several years and initially received several rejections and criticism. Her first published book was in 1999. It is a short story collection “Interpreter of Maladies.” The short stories reflect on subjects like immigration, marriage complications and others. Those topics are close to Jhumpa Lahiri because she has a migration experience that inspired her to write. This book was well received by Americans but criticized in India.

Critics in India stated that she should have portrayed Indians more positively than she did. Some reviews proposed to develop a new term “distant-author,” to describe people like Jhumpa Lahiri because in her book she had revealed India and people in India not too well. The reason for this being that she has become a part of other country and just does not know India so well.

Nevertheless, the book was sold widely and received a Pulitzer Prize for Fiction in the year 2000.

Jhumpa Lahiri published her next book in 2003. It was a novel “The Namesake,” which tells a story of the Ganguli family over 30 years. In the novel, Lahiri describes the cultural gap between children and parents in a family that immigrated to the United States. The book was later adapted into a movie. The movie was released in 2007.

In 2008, Lahiri published another book. It was again a book of short stories, called “Unaccustomed Earth.” This book reached the first place on The New York Times bestseller list. Lahiri has also published some of her short stories in the magazine “The New Yorker.”

In 2013 a novel by Lahiri, “The Lowland,” was nominated for several awards - the Man Booker Prize, National Book Award for Fiction; unfortunately, it didn’t receive them. It won an award two years later, in 2015, when it was nominated for the DSC Prize for South Asian Literature.

In 2015, another Lahiri’s work was published. This time it was an essay “Teach Yourself Italian.” This was published in “The New Yorker” and reflected the difficulties and challenges that she had lived through while learning the Italian language. Lahiri wrote the essay in Italian, and for it to be published, it had to be translated into English.

In her stories and novels, Jhumpa Lahiri talks very much about the topic of immigration. Most often the characters in her stories are Indians who migrate to America and face difficulties and challenges very similar to those, that her own family had. Initially, she focused on the struggles to raise a family in a different country, while still maintaining the culture of the homeland intact. Later on, her writing started focusing more on the challenges of descendants of these immigrants, and how the cultural gap between parents and children develops.

Jhumpa Lahiri married Alberto Vourcoulias-Bush in 2001. He was at the time editor of “Time.” He is still working there to this day, as a senior editor. They live in Rome, with their two children, who were born in 2002 and 2005.