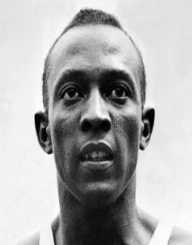 American athlete James Cleveland Owens was born on the 12 September 1913 in Oakville, Alabama. He was the son of a sharecropper, the grandson of slaves. Owens picked cotton until he was nine years old. After that, his family moved to Cleveland. When a teacher asked his name, he said it was J.C., and that is how he became to be called Jessie.

Jesse Owens did his high school at East Technical High School, Cleveland. It was at high school that he ran his first race at the age of 13. After graduating from high school. Owens enrolled at Ohio State University. He had no athletic scholarship so worked as a night elevator operator to pay his way through university.

As a sophomore, Jesse Owens won his first Big Ten Championships and broke some records in the process.

Despite calls to boycott the Olympics because of Nazism and their racial politics, the Americans decided to participate in the games. The U.S. Olympic track team consisted of 66 athletes, and 10 of them were African Americans, including Jesse Owens. Eleven of the individual gold medals in track was won by the American men’s team, including six medals earned by African Americans. Jesse Owens won the 100-meter dash in 10.3 seconds, the 200-meter dash in 20.7 seconds and the broad jump at 26 feet 5 ½ inches. He also led the U.S. team which won the 400-meter relay in 39.8 seconds.

There was a famous incident when Hitler refused to congratulate and shake the hands of the African American winners. Owens often referred to it in speeches, reminding Americans when he returned home to his native country, he was not allowed to ride in the front of the bus, had to use the back door in a lot of places and could not live where he wanted. When Owens returned home, he did not receive a congratulatory phone call from President D. Roosevelt, and he was not invited to the White House. In 1976, President Gerald Ford rectified this when he presented Owens with the Presidential Medal of Freedom. And a few years later, President Jimmy Carter presented him with the Living Legends Award.

Jesse Owens did not return home to contracts and endorsements. Instead, he got a job as a playground janitor and worked as an amateur runner racing against cars, trucks, and horses. He also toured with the Harlem Globetrotters basketball team. Owens then became a disc jockey. He was a gifted speaker, and his speeches included advice on healthy living, fairness, ethics and the benefits of patriotism. At one stage Owens was a personnel official with Ford Motor Company and later a sales director for a sports goods firm. In the last year of his life, Owens was seen on television in an advertisement for American Express.

He was also an author and penned Blackthink (1970). In 1983 he spoke at the UN against the system of apartheid in South Africa.

In his later years, Owens quit running. Instead, he took to walking two miles every morning, swimming and lifting weights at the Phoenix, Y.M.C.A. to keep fit.

Jesse Owens died in on the 31 March 1980 at the University of Arizona Hospital in Tucson after being treated for lung cancer. He was sixty-six years of age.