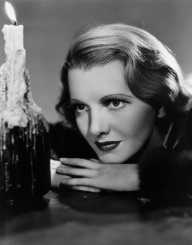 Jean Arthur was an American actress who is best known for her appearances in classic films, Mr. Smith Goes to Washington, and Mr. Deeds Goes to Town.

Arthur was born on 17 October 1900 in Plattsburgh, New York as Gladys Georgina Greene. Her family was made up of parents, Johanna Nelson and Hubert Greene, and brothers, Donald, Albert and Robert. The family moved to Maine in 1908, for her fathers work, and lived there for seven years. Arthur’s father worked as a photographer. As well as Maine the family also lived in Jacksonville and various towns in New York state for short periods. Arthur’s father and brothers registered for the military draft during the First World War and her brother Albert was killed during the conflict. Arthur herself worked as a stenographer during the War, having dropped out of high school in 1915. In the early 1920s, Arthur started doing modeling work. It was during a shoot that Fox Film Studios signed Arthur.

Arthur began her acting career with minor roles in a series of silent films. Her debut came in 1923 when she appeared in, Cameo Kirby. It was for her acting career that Arthur developed her stage name by combining Jeanne d’Arc and King Arthur. The studio tried to sell Arthur as a flapper character. Her first lead role was for the film, The Temple of Venus. However, Arthur was dropped from the role by her director after just three days of filming. Arthur switched to comedic roles following the disappointment. Arthur also appeared in a number of B standard western films for Action Pictures. Arthur received just twenty five dollars per film and worked in poor conditions in the Mojave Desert. Her first film successes came in 1927, Arthur appeared in two films, Husband Hunters and Horse Shoes, both films were commercial hits. Arthur’s financial situation greatly improved following the two films release with her salary increasing to seven hundred dollars. She was then given the lead female role in The Poor Nut.

Arthur suffered from a scathing review in Variety magazine following the release of the film. The lack of success led to Arthur considering retirement from acting. She was convinced to take a small role in Paramount Pictures’ first sound film, Warming Up. The film brought Arthur critical praise and a one hundred and fifty dollars a week contract from Paramount Pictures. Despite the success of Warming Up, Arthur was sceptical of making the transition to talking pictures at first. She relented and began taking voice training sessions on Broadway. Her next film, The Canary Murder Case, again saw Arthur receive criticism for her acting ability, but a second film in 1929, The Mysterious Dr Fu Manchu, saw Arthur receive rave reviews.

Arthur struggled with her fame and loathed interviews and photo shoots. In 1929, she also starred alongside Clara Bow in, The Saturday Night Kid. Arthur was said to have upstaged the more accomplished Bow, but Arthur was full of praise for the help Bow had given her during production. Arthur still struggled to break out as a lead actress and it was felt she lacked the sex appeal to ever take a starring role. Paramount Pictures did not re-sign Arthur when her contract ended in 1931. Arthur returned to New York and gained work as an actress on Broadway. She debuted in the Broadway production, Foreign Affairs, in 1932. The show was not a commercial success, but Arthur received critical praise. She continued to appear in a series of unsuccessful productions but received positive reviews for her performances.

In 1934, Arthur returned to Hollywood and signed with Columbia Pictures. She achieved great success in, The Whole Town is Talking. But her real breakout role was as Babe Bennett in the 1936 film, Mr Deeds Goes to Town. Arthur earned more than the President of the United States of America in 1936 and she earned the nickname, ‘The American Greta Garbo’. In 1938, she received top billing in the Academy Award-nominated, You Can’t Take it With You. The film also starred Jimmy Stewart. She again appeared alongside Stewart in the iconic 1939 film, Mr Smith Goes to Washington. She appeared alongside Cary Grant in, Only Angels Have Wings and The Talk of the Town. In 1943, Arthur was nominated for an Academy Award for her performance in, The More the Merrier.

Arthur retired in 1944 as Columbia Picture’s best paid actress. She returned in 1948 for the film, A Foreign Affair, and again returned to acting in 1953 for the western, Shane. Shane proved her best box office take and her final big-screen performance. She continued to appear irregularly in stage productions. She struggled with anxiety during public appearances and often vomited between scenes. During her retirement Arthur worked as an acting teacher in Vassar College. While a teacher she mentored a young Meryl Streep. Arthur’s final acting role was in a 1975 play, First Monday in October.

Arthur married Julian Anker in 1928. However, the marriage was annulled after just a single day. She married Frank Ross, a film producer, in 1932. The marriage ended in divorce in 1949. She had no children. She also had a relationship with Paramount Pictures’ producer David Selznick during her time at the studio. Arthur was mostly reclusive during her life. She died of heart failure on 19 June 1991.