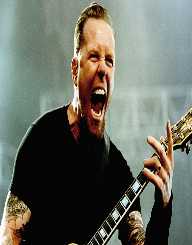 James Hetfield was born on August 3, 1963, in Downey, California, USA.

Even as a child, James Hetfield loved music. Growing up, he learned how to play a variety of instruments, including the guitar and piano.

In 1981, James Hetfield read an ad in a local newspaper. The ad was made by Lars Ulrich, who was looking for people to form a band with him. Hetfield joined the band shortly after seeing the add, becoming the singer and a guitarist, while Ulrich played the drums. Later, two more people joined the band: Ron McGovney played the bass, and Dave Mustaine played lead guitar. Soon after, the band was officially named Metallica. The band quickly recorded their first single, No Life ‘Til Leather. The song was a hit. The band had to move so they could get more gigs. It was around this time that McGovney left the band and was released with another bassist, Cliff Burton.

In 1983 the band signed a contract with Megaforce Records. The band then moved to New York. Mustaine left the band around this time and was replaced with Kirk Hammett. In late 1983, the band released their first album: Kill ‘Em All. Throughout the 1980’s the band produced several more albums, all becoming insanely popular quickly. Some of these albums are listed below.

Ride the Lightning
Master of Puppets
....And Justice for All

Sadly, the band changed again in the late 1980’s when their tour bus got in a terrible accident. Cliff Burton died in the crash, but the rest of the band member survived. The band hated having to replace Burton, but they knew they had to. After many auditions, Jason Newsted joined the band. Even with tragedy within the band, they kept making great music. In the 1990’s, the released several more albums, including The Black Album and Load. In the early 1990’s they also released their first live album: Live Shit: Binge and Purge. The band also released a DVD in the late 1990’s called Cunning Stunts.

In the 2000’s, the band’s success only continued. However, James Hetfield had to take a break. He left the band in 2001, but he was not replaced. The band agreed to go on a hiatus. They reformed about a year later in 2002. The time apart had done good things for the band, and they were ready to produce music again. Their first album of the new century was St. Anger. In 2003, the band produced a documentary: Some Kind of Monster. They also toured a lot during this decade, having the Summer Sanitarium and Madly in Anger With The World tours. In 2008, the band released another album: World Magnetic. They also began their World Magnetic tour. Some of the venues they played at were recorded and make into a DVD.

Another decade brought more success. In 2011, the band released another album, Lulu. This was not as popular as their previous albums, though. During the early part of this decade, the band continued to tour. They focused on their older music, like the albums they produced in the 1980’s and 1990’s. In 2013, the band had their own movie released: Metallica Through the Never. In 2013, the band also did something that no other band had ever done: played a live concert in Antarctica. A live recording from a 2003 concert was made into a CD in 2016: Liberté, Egalité, Fraternité, Metallica! The band’s most recent album came out in 2017: Hardwired...To Self-Destruct. The band is currently working on more music and touring. There seems to be no end in sight for this band.

Throughout James Hetfield’s long career with Metallica, he and the band have earned almost 30 music awards and have been nominated for more than 60 others. Some of the band’s most prestigious awards are listed below.

James Hetfield married Francesca Tomasi in 1997. Together, the couple has three children: Marcella, Cali, and Castor.