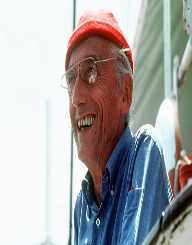 Jacques-Yves Cousteau was born on 11th June 1910, to Daniel and Elisabeth Cousteau. He was born in Saint-Andre-de-Cubzac, France. Jacques-Yve Cousteau was one of two children, with an older brother. His father was an international lawyer, and his mother came from a wealthy family that owned land and worked in the wine industry. As a young child, Jacques Cousteau was quite sickly, and not allowed to partake in any strenuous exercise. He took up swimming instead, and from his early years became fascinated with the ocean.

Between the ages of 10-12, his parents had relocated to the United States on a temporary basis, and during this period Cousteau learned to speak English fluently. The family returned to France, settling in Marseilles. This suited Jacques-Yve Cousteau perfectly, and he spent much of his time snorkeling in the local sea.

Unfortunately, at the time, Jacques Cousteau did not do well in school, so his parents decided to send him to a boarding school in Alsace, France, which was well known for its strict disciplinarian attitude. After completing his preparatory studies there, Cousteau then went on to College Stanislas in Paris.

Jacques Cousteau served in the Navy for several years, until he had a serious car accident. He broke many bones in the accident, including multiple fractures to both arms. This ended his active serving in the Navy. He became a gunnery instructor instead. He used swimming for his rehabilitation after the accident, particularly to strengthen his arms. His exploration of the ocean convinced him that diving was to become his life’s work.

Jacques Cousteau served in the Navy until 1949. During these years, he also continued to swim and start his oceanographic research, filming, and writing. He was a spy for France during the war. He had been recruited before the war into the French intelligence service and worked for the Resistance against the Italian intelligence services. Over the years, Jacques Cousteau has been prolific in his research and particularly in trying to educate the world on the ocean, its inhabitants, and the environment. He filmed more than 120 documentaries for television and wrote more than 50 books. He also founded an environmental protection society.

Although SCUBA equipment had been invented in earlier years, diving was a cumbersome exercise with all the equipment that was required, including the heavy helmet and diving suit. Jacques Cousteau tried to find a better way to control the breathing apparatus, including trying to breathe just pure oxygen, but it didn’t work.

Jacques Cousteau came across a regulator that was invented in 1942 by Emile Gagnan, a French engineer. The regulator allowed gas to be controlled, only letting it through ‘on demand’ and not continuously. He immediately saw the ramifications such an invention could make to the breathing apparatus for diving. He suggested some changes to Gagnan for modifying the regulator, and in 1943, the diving regulator was co-invented and patented by Gagnan and Cousteau. The apparatus today is called the aqualung.

Jacques Cousteau received numerous awards, both military and civilian, including the following:

Jacques Cousteau married Simone Melchior in 1937. They had two sons, Jean-Michel, and Philippe. Both boys took part in their father’s studies, accompanying him on board the Calypso, which was his research vessel.

His wife died in 1990, and one year later he married Francine Triplet. He already had two children with Triplet – a daughter, Diane, and a son, Pierre-Yves. Both children were born while Cousteau was still married to Melchior.

Jacques Cousteau's second wife, Francine, is today the head of both the Cousteau Foundation and the Cousteau Society, continuing her husband’s work.

Jacques Cousteau's legacy will live on through the prolific volumes of his documentaries and books.

His foundation and society are also actively seeking to teach others about his work. Their mission is to educate people to love and protect the water systems of the planet for the well-being of future generations.

In 2007, Jacques Cousteau had a special edition divers’ watch named after him, and, in each watch was a small piece of timber from the original wreckage of his ship Calypso. The International Watch Company, who created the watch, donate partial proceeds from each sale to the Cousteau Society, who are currently raising funds to enable a second ship, Calypso II, to be built.