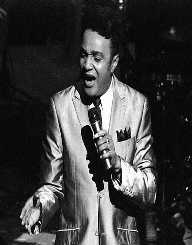 American singer and entertainer Jackie Wilson was born in Detroit, Michigan on the 9 June 1934 to Jack Leroy and Eliza Mae Wilson. His parts separated when he was a child and his mother remarried which gave him a stepsister, Joyce.

Jackie Wilson left high school without graduating, leaving school after he had completed the 8th Grade.

Jackie Wilson's singing talent was apparent from an early age, and as a teenager, he was a member of The Ever Ready Gospel Singers. He also busked on street corners and took part in talent competitions. Early recordings include Danny Boy and Rainy Day Blues, but these did not make an impression on the market at the time. In 1952 he became a member of Billy Ward and His Dominoes. He toured with the group as the understudy for lead vocalist Clyde McPhatter.

At the end of the tour, Jackie Wilson relocated to New York City. Julliard trained Ward recognised Wilson’s musical genius and mentored him, giving him voice training as well as advice on stage performance. In 1956 a young Elvis Presley saw Wilson performing in Las Vegas and was impressed, claiming that Wilson sang Don’t Be Cruel better than his original version of the song.

In 1953 Jackie Wilson replaced Clyde McPhatter was the lead vocalist with the Dominoes, and he continued in that role until 1957 when he embarked upon a solo career. His first solo single was Reet Petite (1957) co-written by Berry Gordy and Roquel Davis.

Gordy went on to form Motown Records and also co-wrote Jackie Wilson hit singles Lonely Teardrops (1958), and That’s Why (I Love You So) (1959). Lonely Teardrops reached No.1 on the rhythm and blues chart and No.7 on the pop chart.

His career established Wilson began touring and continued released hit singles including Baby Workout (1963) and Your Love Keeps Lifting Me (1967). Jackie Wilson was about to release a comeback album Nobody But You (1975) when he had either a or stroke heart attack when performing. He also hit his head in the fall. This event put an end to Jackie Wilson's career as it left him semi-incapacitated until his death.

He married his childhood girlfriend Freda Hood in February 1951. The couple had four children: two sons and two daughters. They divorced in 1965 and Jackie Wilson married Harlean Harris in 1967. That marriage was short-lived, and in 1970 he married Lynn Crochet and had two children with her.  After Jackie Wilson's death, there was a legal dispute about the validity of his separation from Harris who later gained control of his estate.

In 1987 Jackie Wilson was posthumously inducted into the Rock and Roll Hall of Fame.