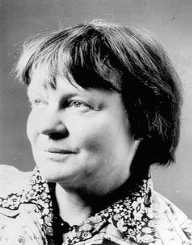 Author Iris Murdoch was born in Dublin, Ireland on the 15 July 1919 to Anglo-Irish parents Wills Murdoch, a civil servant, and Irene Richardson. When she was an infant, the family moved to London. She was an only child who later wrote that she had a happy childhood with loving parents.

Iris Murdoch attended Badminton School in Bristol England and then enrolled at Somerville College, Oxford University (1938-1942) where she received first-class honours. When she was a student in 1939, she was a member of the Communist Party for a short time but wrote that she lost her illusions soon after joining. Between 1947-1948, she held a Sarah Smithson Studentship in philosophy at Newnham College at Cambridge University, England and became a fellow at St. Anne’s College Oxford. In 1949, she was appointed a university lecturer in philosophy.

Iris Murdoch was an assistant principal in the British Treasury (1942-1944). She also worked as an administrative officer with the United Nations Relief and Rehabilitation Administration in England and Europe (1944-1946).

In addition to her novels, Murdoch also published literary criticism, two plays and three books on philosophy, The Sovereignty of the Good (1970), The Fire and the Sun: Why Plato Banished the Artists and Acastos: Two Platonic Dialogues (1986). She produced two books of poetry: A Year of Birds (1978) and Poems by Iris Murdoch (1997). Plays include The Servants (1980) A Black Prince (1987) and A Severed Head (1964).

Iris Murdoch won the Booker Prize for The Sea in 1978. Other awards include the James Tait Black Memorial Prize and the Whitbread Literary Award for Fiction. She became a companion of the British Empire in 1976 and 1987, a dame of the British Empire. She was also awarded English PEN’s Golden PEN Award for a Lifetime’s Distinguished Service to Literature.

Iris Murdoch married an Oxford don, John Bayley in 1956. The couple had no children. Iris Murdoch died of Alzheimer's in 1999. Bayley wrote a memoir of their marriage and her illness, entitled Elegy for Iris.  Peter J. Conradi wrote a biography Iris Murdoch: A Life which was published in 2001. In 2001, Judy Dench played the title role in the film Iris which was directed by Richard Eyre and based on Bayley’s memoir.