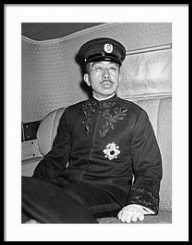 Hirohito was the Emperor of Japan from 1926 until his death in 1989. His birth name was Hirohito, but after taking the throne, he was known as the Emperor Showa. Hirohito was born in Tokyo, in Aoyama Palace to his father Crown Prince Yoshihito (later becoming Emperor Taisho) and Crown Princess Sadako (Empress Teimei). On his 70th day after birth, Hirohito was placed in the care of Count Kawamura Sumiyoshi, and when he was three years old, he and his brother returned to the court. He began his studies in 1908 at the Peers School.

In 1912, Hirohito’s father became the emperor after the death of Emperor Meiji, Hirohito’s grandfather. Hirohito was formally commissioned in the throne and the army and navy as second lieutenant and ensign and was given the Grand Cordon of the Order of the Chrysanthemum. I 1916, he was formally proclaimed the Crown Prince. After finishing the peer's school in 1914, Hirohito went to the Institute for the crown prince, which he graduated in 1921. The same year, he was also promoted to be the Major in the army and Lieutenant Commander in the navy.

Hirohito’s father died on December 25, 1926. Hirohito succeeded him as the emperor and took the 124th Chrysanthemum Throne. He took the title Showa, which mean “enlightened peace.” The beginning of his emperorship was not easy since Hirohito was a gentleman, who allegedly did not have a big influence on the army. There was a lot of political turmoil in the country, and the military began to revolt. This resulted in the assassination of several public officials, including the prime minister. The same year, he early escaped assassination by a bomb.

Japan became involved in the second Sino-Japanese War. Japan became more aggressive about their stance and implemented more serious military policies. These actions later led the country to become involved in the World War II Axis Powers. Although Hirohito was not enthusiastic about Japan’s involvement, he still supported his country.

After 1945 bombing of Hiroshima and Nagasaki, Hirohito announced the nation’s unconditional surrender to the Allied Forces. In the WWII, Japan lost an estimated 800, 000 civilians. The United States occupied the country for several years, and various democratic reforms were introduced.

Hirohito was often treated like a war criminal, and many wanted him to be punished as one. At the time, General Douglas MacArthur was overseeing the rehabilitation of Japan. Emperor began to bargain with MacArthur to make changes in Japanese constitution, denouncing the imperial power and “divinity.” For this reason, the emperor became a figurehead, and the country eventually regained political stability and became an economic leader.

Hirohito remained to be an active figure in Japan’s politics. Although he was not seen as the divine emperor, he was still the head of the state. Hirohito was of major importance to rebuild Japan’s image in the eyes of the world. Besides his work as the head of the state, Hirohito also wrote several books on his favorite topic-marine biology.

In 1987, Hirohito experienced some digestive problems and had to undergo a pancreas surgery. During the surgery, the doctors discovered that he has duodenal cancer. He made a full recovery, but about a year later, collapsed in the palace. Over the next several months his status worsened, and he was suffering from continuous internal bleeding. He died on January 7, 1989. His son Emperor Akihito succeeded him. The state funeral was held on February 24. Although the ceremony was formal, it was not conducted in the traditional Shinto manner. Many of the world’s leaders attended the funeral. He is buried in the Musashi Imperial Graveyard alongside his father.

Besides his appointments in the Japanese army, Hirohito was also the Honorary General in the British Army (1921) and Field-Marshal of Regular Army (1930). He has also received numerous honor from Belgium, Spain, Sweden, Denmark, Greece and other countries.