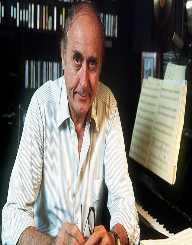 Henry Mancini was a famous composer, conductor, and musician, a man of scarce talent. He came up with many celebrated films and TV shows. Henry is best known for these films and was deservedly awarded The Grammy lifetime achievement award in 1995, among other significant honors. Many claims he is one of the best composers ever to live.

More so, Mancini left a towering effect on music during his lifetime and was incredibly prolific and creative in his productions. He made his work outstanding by introducing jazz to television and film. He was the first one ever to do so.

Henry Mancini was born on April 16, 1924, in Cleveland, Ohio. His parents were Quinto and Anna Mancini and were Italian immigrants. Quinto worked as a steelworker. Henry was raised in Pittsburgh region, an area in West Aliquippa, Pennsylvania. His father loved playing musical instruments, especially the flute, and often played it with Henry when he was about twelve years old.

Previously while he was about eight, his father had enrolled him in Piccolo lessons. They played the flute at a professional level together, through the Aliquot Italian Immigrant band. This developed a love and passion for music in him.

Henry attained his education at Aliquippa High school and completed his high school studies in 1942. He went to Carnegie Institute of technology and under the excellent tutelage of the likes of Max Adkins; he gained much in his musical interests.

After that, he joined the Julliard School of music, located in New York City. While there, he worked under pianist and bandleader Vincent Lopez, his role being ghosting for him. However, he did not complete his studies there, and after approximately a year, he joined the United States Army. At the army, he served in the infantry and the army band.

Henry Mancini began his career at around 1946 after being discharged from the army. He had perfected his skills to counterpoint, composition, orchestration, and harmony, with the help of studies with various composers. He started his career as a pianist and arranger and worked for Glenn Miller Orchestra.

In the year 1952, Mancini teamed up with Universal Pictures, specifically in the musical sector. While there, Henry worked in about 100 movies in six years duration, contributing directly to their vocal part. Examples of these films are; `It came from outer space,’` This island earth’ and `The creature walks among us.’ More so he contributed to film `The Glenn Miller Story’ that enjoyed great success, and his effort recognized, earning him his first academy award nomination.

Henry Mancini also made his debut in singing and songwriting at this time.  He released a solo titled `I won’t let you out of my heart’ which was a significant hit. In 1958, he stopped working with Universal Pictures and became a self-employed composer/ arranger. Soon, Mancini met producer Blake Edwards, marking the beginning of a long-lasting relationship and association in film productions.

Together, they collaborated to make about 30 films. Mancini’s job was to pioneer jazz elements in some of these films. Some of his scores in the collaboration are; Breakfast at Tiffany and Days of wine and roses. Apart from Edwards, Mancini had long-lasting relationships with other producers, for example, Stanley Donen.

Apart from films, Mancini scored many TV movies. Examples are; `The Thornbirds’ and `Shadow Box.’ He was very prolific in his work and also wrote many television themes like Mr. Lucky among others. He also extended his hard work and creativity to musical works. He released many songs, recording over 90 albums.

In the albums, his main musical styles were the big band, pop and lighted classical. Also, he was a concert performer, with an average of about 600 performances during his lifetime. Some of his symphony performances were; Minnesota orchestra, London symphony orchestra, and Los Angeles Philharmonic.

Henry Mancini was at the US army air force. At this time there, he met Glen Miller and worked as arranger and pianist. He was able to work with many inspiring personalities while there, among them singer Tony Martina.

Some of Henry Mancini’s significant works are famous movie soundtracks. These include:

Henry Mancini came up with many award-winning scores.

Henry Mancini got married to Ginny O’Connor in 1947, a singer he met during his time at the military band. The couple had had three children, a son named Christopher and daughters Monica and Felice.

Henry Mancini had pancreatic cancer that led to his death on June 14, 1994.